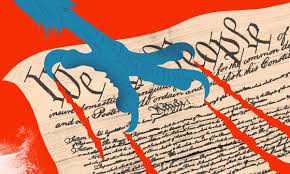 Demonstrations and protests have erupted in 40 U.S. states after George Floyd, an African American man, was killed by police, sparking outrage watched by the whole world. The United States is a great nation, known as the mother of democracy in the world, but what has democracy accomplished in the United States? And where is the American landscape headed?

There is no doubt that what is happening today in the United States is a result of the democracy that previous U.S. administrations used as an excuse to attack Arab countries and overthrow their regimes. Today, America is suffering from a democracy which led to the chaos, looting and larceny that the United States is witnessing. The same thing happened in the Arab world during the ruinous Arab revolutions that were backed by the mullahs’ regime in coordination with former President Barack Obama’s administration.

The killing of an American citizen by the police is undoubtedly a crime. Everyone agrees that the police officer who killed Floyd is guilty and deserves to be prosecuted because what he did is a crime. Yet no one is happy with the chaos, theft and economic damage that is taking place in more than one U.S. state, despite President Donald Trump’s pledge to prosecute the police officer and bring him to justice. Democracy is a dangerous, double-edged sword that often leads to chaos, as the nation’s power declines with the emergence of thugs, anarchists and criminals under the umbrella of democracy.

This is what the United States has realized today.

The U.S. supported terrorists and anarchists in the Arab world, and they were forever strengthened by American administration support. They refused to uphold the law and recognize the nation’s authority because they do not want a nation; they want to remain in chaos. They are not proponents of national progress and a country’s well-being because they believe in the democracy of creative chaos.

The American landscape is in a state of unprecedented turmoil. President Trump faces a group of anarchists in addition to his Democratic opponents who do not want him to serve a second term. They want to return to power so they can support their followers in the Middle East: the mullahs’ regime, Turkey, the terrorist Muslim Brotherhood and Qatar.

The chaotic scene today in the United States is driven by Obama, the godfather of the ruinous Arab revolutions. Obama is attacking the U.S. system of government and leading a smear campaign to mislead people about the Trump, a man who has achieved so much for the American people during his first term following Obama’s domestic and international failures and after Obama allowed the mullahs’ regime to destroy Arab land and kill its people.

Trump believes in a democracy that coexists with a nation’s authority to govern and in upholding its sovereignty under the law and the Constitution which guarantees freedom and equality for all. Meanwhile, Democrats who oppose him such as Obama, Ilhan Omar and Rashida Tlaib believe in the creative chaos that destroys nations and which they introduced to the Middle East. They are using that chaos the same way today to achieve the vicious goal of removing President Trump from the White House.