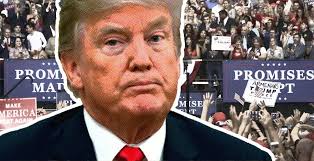 The president has found himself in the midst of a series of scandals and problems of his own making.

In political terms, President Donald Trump has just gone through the two worst weeks of his life.

Less than five months away from an election in which he is seeking a second term, the president has found himself in the midst of a series of scandals and problems of his own making.

In addition to the three or four books that have emerged over the last few weeks featuring unfavorable descriptions of Trump, his working style and his motives, the way he has dealt with issues ranging from anti-racist protests triggered by the death of the George Floyd, an African American man, to COVID-19 outbreak that has plagued the country, has forced the president into a corner.

His habit of thoughtlessly tweeting or re tweeting certainly doesn’t help. Legal attempts to stop the publication of at least two books, one written by former National Security Advisor John Bolton, and another by his niece, Mary Trump, has only served to highlight the authors and their descriptions of the president as egocentric, detached, ignorant and even capricious.

Trump’s decision to portray himself as a proponent of “law and order” when faced with the protests sparked by the video of Floyd’s death at the hands of white police officers only accentuates the impression that he’s not interested in addressing the concerns of minorities.

Meanwhile, the ongoing scandal of his response to the health crisis involving the COVID-19 pandemic, which the press first dismissed as mismanagement and later as politicization, doesn’t help either. Especially when Trump later insisted on reopening the economy and holding crowded rallies while the infection epicenter moved to Republican states, which shut down ineffectively and late following Trump’s example.

The result is that less than five months away from the Nov. 3 election, Trump finds himself at a disadvantage, with a 56% to 41% approval rating against a reliable opponent, the presumptive Democratic candidate, Joe Biden.

At the same time, four months is a long time in U.S. politics, which are based on images and perceptions of the moment.

Now we await the Republicans’ efforts to paint Biden in the worst possible light, whether as a puppet for a supposedly socialist agenda, or as a feeble old man.

Republicans see another greater danger: Trump’s personal unpopularity, so much so that aside from the presidential election, it now appears that the Republican majority in the Senate is at stake. If the Democrats manage to win the five seats they need to claim the majority in the Senate, they’ll have total control of Congress, at least for the next two years.