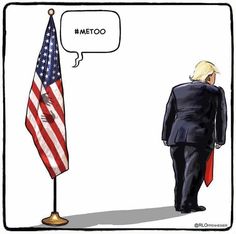 The COVID-19 pandemic has gotten out of hand almost everywhere in the United States. Meanwhile, racism against whites is spreading with the same stupidity as the old racism against Blacks.

What is the American president doing to stem these two scourges? He gets on his soapbox and rants that the pandemic is in the process of disappearing, and he stokes the fires that divide American society.

We could daydream, just for a moment, about the policies of another president in similar circumstances. Not one of the preceding presidents, whether Democrat or Republican, would embark on the route Donald Trump is taking.

We must repeat, Trump suffers from a grave mental illness. The book that his niece, Mary Trump, a practicing psychologist, will soon publish could confirm the diagnosis that has already been proposed by tens of thousands of mental health professionals.

Trump doesn’t think about anyone but himself, his wealth, his reelection and his image.

A recent survey by Carl Bernstein conducted for CNN confirms what everyone has perceived for a long time: Trump seeks the approval of dictators and he despises the democratic leaders, especially women.

In normal times, the American system could survive a crazy president. But in times of crisis, presidential lunacy becomes much more dangerous.

The United States is confronting three simultaneous crises: the dictator Xi Jinping, COVID-19 and the rousing of minorities.

There are known solutions. Forging alliances could help the United States confront China. Confinement measures could slow the spread of COVID-19. Education and fighting poverty could give minorities access to true equality.

Instead of applying these solutions, Trump, in his illness, brings everything down to his own interests.

He sees international relations through his skewed admiration for Xi Jinping, Vladimir Putin, or Recep Tayyip Erdogan, and his contempt for Angela Merkel or Emmanuel Macron.

He doesn’t understand confinement measures. He wants his own tourist sites to reopen as fast as possible, so he can make money.

He equates anti-white racist tendencies with the whole fight against racism and makes himself the defender of people with white skin.

Trump’s lunacy isolates the United States globally. It risks sinking the American economy. It pushes racism against white people into a discourse that is just as crazy as Trump’s.

Quebec and Canada are affected by Trump’s dysfunction. We have counted on the United States in many areas for a long time, and need to continue doing so.