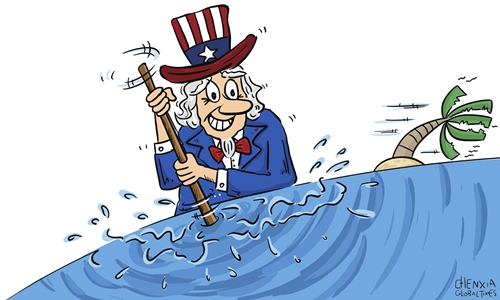 Some American politicians are again looking to stir up the situation in the South China Sea!

On July 13, Secretary of State Mike Pompeo, also known as the leader of the anti-Chinese camp, issued a statement saying that China’s claims on resources across the South China Sea were “completely unlawful.” It seems that he is more than ready to fight China on this issue.

In the past, the U.S. had made a commitment not to take a stand on sovereignty over the South China Sea. Now that Pompeo is backtracking on this commitment, there will surely be a counterstrike from China. The Chinese Embassy made a statement as soon as possible, solemnly expressing firm disapproval of this behavior.

Even though the U.S is not a party to the disputes regarding the South China Sea, it has long been interfering. The U.S. is the least qualified country to meddle with this issue − are Pompeo and his followers really unaware of this fact?

First, the U.S. is in no position to use the United Nations Convention for the Law of the Sea as an argument while it has never ratified the UNCLOS.

In his statement, Pompeo repeatedly mentioned the UNCLOS in an attempt to make his claims sound legitimate. However, he might have forgotten that the U.S. is the only permanent member of the U.N. Security Council that has not ratified this convention. The UNCLOS came into force as early as 1994 – how ridiculous it is that the U.S. is demanding that other countries abide by this convention while the U.S. itself is still not part of it!

Moreover, China’s territorial sovereignty and maritime rights in the South China Sea have strong historical roots. They have been upheld by successive governments of China and conform to international laws, including the Charter of the United Nations and the UNCLOS. The U.S. has no valid reason to question them.

Second, the U.S. is in no position to blame China while it is the one who is militarizing the South China Sea.

Pompeo and his followers portray China as a “bully” and go as far as making the ridiculous claim that China is undermining the stability of the South China Sea. The truth is just the opposite. The United States aggressively invades the waters and airspaces of other countries, dominates major oceans around the world and advances its militarization of the South China Sea at all costs while claiming that it is maintaining the freedom of navigation and overflight. Despite the distance, the U.S. has been sending naval ships and military aircraft all the way to the South China Sea frequently for many years to carry out the so-called “freedom-of-navigation” operations, while in fact, it has been approaching China for reconnaissance. Recently, two U.S. carriers were sent to carry out exercises on the South China Sea – another full-on display of its military power.

In fact, the current situation in the South China Sea is generally stable and improving over time. China maintains active communication with littoral countries through a consultation mechanism on maritime issues and promotes cooperation among relevant countries. China has also been actively encouraging consultations on the Code of Conduct in the South China Sea with the Association of Southeast Asian Nation member states, and important progress has been made. However, the United States has chosen to issue a statement regarding the South China Sea at this point, which is clearly aimed at sabotaging the hard-won stability in the area and creating tension and confrontation.

Third, the U.S. is in no position to stick its oar into the South China Sea issue after declaring that it will no longer be the “policeman of the world.”

As the most powerful country in the world, the U.S. should take on the greatest responsibility consistent with international law. However, the country has long regarded itself as the world’s cop under the motto “might is right.” The U.S. constantly meddles with the affairs of other countries and territories and has been reduced to a disruptor of regional peace and stability. The world has suffered from this unwelcome global policeman for a long time.

In his recent speech at the United States Military Academy at West Point, the president said of the U.S.,“We are not the policemen of the world.” Well, then why is this country still involved in the South China Sea issue? China and the littoral countries along the South China Sea are well equipped with the knowledge and capabilities to resolve any dispute. Pompeo’s statement shows that the U.S. is not only not giving up its title as the global policeman but is also trying to maintain its global hegemony. The Pompeo camp is worried that China will replace the U.S. as the world leader. So, it concentrates on confronting China by loosening its grip on the Middle East, Europe, Africa, etc. The South China Sea is one of the cards that the U.S. is playing to weaken China.

We believe in and fear no evil. We make and fear no trouble. The Pompeo camp can make ridiculous statements and stir up trouble all they want, but the fact that the islands of the South China Sea belong to China remains true. Pompeo and his followers cannot deny China’s territorial sovereignty and maritime rights in the South China Sea, and neither can they sway our determination to guard this sea that we inherited from our ancestors.