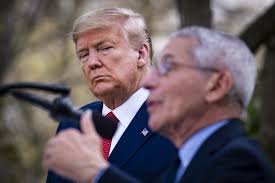 Donald Trump is not pleased with the ill-fated yet correct predictions made by the expert epidemiologist.

The White House, increasingly overwhelmed by a pandemic it doesn’t know how to manage, is attempting to overcome it by making a counter-attack against the country’s leading expert in infectious disease. Dr. Anthony Fauci has been publicly discredited by administration officials. Meanwhile, Trump is taking action to downplay Fauci’s warnings regarding the consequences of the lack of response to the pandemic.

An official told NBC News that “several White House officials are concerned about the number of times Dr. Fauci has been wrong on things.”

And then provided a list of a dozen of Fauci’s purportedly false comments, dating back to the start of the pandemic. Trump, himself, made the same announcement in a Fox interview with Sean Hannity. During the interview, Trump confirmed that “Dr. Fauci is a nice man, but he’s made a lot of mistakes.”

Trump, knowing how much Fauci is loved and respected by the American public, now perceives him to be a political opponent rather than an expert who should guide his decisions during the pandemic.

Trump and the epidemiologist have not spoken to each other directly for weeks. Fauci has said that he has not met with Trump since June 2 or reported to him in person for at least two weeks. In the public eye, the growing tension between them is apparent in the various interviews and announcements they have made. For Trump, this issue is the current focus of his personal and political campaign to publicly discredit an opponent. This, instead of presenting an administration committed to fighting to contain a pandemic that has killed more than 135,000 people in the United States.

Recently, Fauci contradicted Trump by contesting his claim that the U.S. is “doing great.” He criticizes the decision of some states to reopen too quickly, thus ignoring regulations suggested by the task force regarding a timely and safe reopening. In a particularly alarming prediction, Fauci said that he wouldn’t be surprised if the U.S. soon would reach a daily figure of 100,000 new cases — a figure that would reflect a resounding failure to slow down the spread of the virus.

Unfortunately, it seems that Fauci’s predictions and analyses have not been wrong. On Sunday, Florida — one of the first states to loosen restrictive measures — registered 15,300 new cases in one day. New York City never reached that number, even during the worst period of the crisis.

These figures were announced on the same day that — with no concern about the rate of infection — Disney World reopened in Orlando, Florida. However, New York State, where Governor Andrew Cuomo scrupulously complied with Fauci’s guidelines, registered not one death due to COVID-19 for the first time since March. On Friday, for the first time, the United States recorded more than 70,000 new cases of COVID-19, nationally.

Fauci, who has been working with the federal government for decades, cannot be fired directly by the president, and there are no signs that Trump is looking to get rid of him entirely. Instead, the White House attack seems to be aimed at undermining the public’s trust of him, in the hope that Americans will be more inclined to believe in Trump’s optimistic interpretation. Meanwhile, the infection rate is rising and the November election is drawing near.