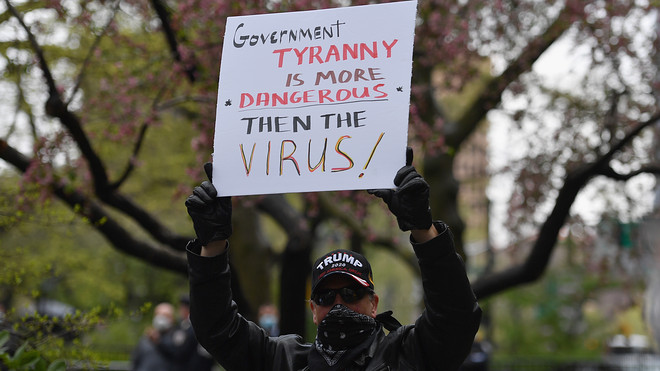 It stands to reason that the closure of the U.S.-Canada border for all nonessential travel is being extended. Following a new agreement between Ottawa and Washington this week, the closure will extend until Aug. 21. Given the growing chaos that the United States is currently facing with the COVID-19 pandemic, it is easy to see that reopening at the end of August will still be a problem. Individuals with an “every man for himself” mindset who’ve reentered Canada from the United States saw their numbers rise 50% during the crisis — solid evidence of the chaos our sick neighbors have not succeeded in containing.

The debates in America are ours, too, and a large part of the world’s debates: quarantines vs. reopening, masks, testing, social distancing, kids returning to school, hospitals overflowing, but in the United States these debates are made even more difficult by partisan divisions that have been poisoning politics for a long time, as well as by a president, Donald Trump, who will not admit that a virus could paralyze the most powerful economy in the world, in turn compromising his own reelection. This man cannot get it into his head, during this horrible time in which fuel is constantly added to the fire, that containing the virus and reviving the economy are two complementary objectives, not contradictory ones.

Far from having disappeared as if by miracle in the spring, as Trump had predicted in February, the infection rate is currently increasing in 41 states. It is most virulent in Florida, Texas, Arizona and California. In fear of experiencing another catastrophe, the state of New York is trying to rigorously set guidelines for travel between states, supposing that this would even be possible. And if governors this week, in a hurry to reopen businesses, seemed to see the amount of resurgence as a risk, the reopening is either in disarray or governors are dragging their feet. The pandemic is worsened here and there by disputes between the levels of government about procedures; for example Georgia, where the Republican governor and the Democratic mayor of Atlanta are at each other’s throats.

The pandemic situation is becoming politicized, where bars and masks are just as much public health concerns as they are partisan and cultural war symbols.

For every reaction to proof that the United States is statistically the most affected in the world (140,000 deaths and growing) and shows no signs of improving soon, Trump has in turn tried to discredit Dr. Anthony Fauci, his highly influential and cautious expert on pandemics, and suggested they cut back on testing, based on the persistent logic that if there are fewer tests, there will be fewer cases.

Even worse is the fact that Trump decided Wednesday to unilaterally modify the 50-year-old National Environmental Policy Act by accelerating federal project approvals for infrastructure (highways, power plants, pipelines, etc.) and limiting the time allowed and conditions for public investigation. Many see this as the deregulation measure with the most consequences ever adopted during Trump’s administration. However, he has not bothered to undo anti-pollution laws and regulations for 3 1/2 years.

It would never enter the mind of this climate change denier that this decision will be a monumental error for the future of humanity. That is to say, our growing vulnerability to pandemics has serious and

well-documented ecological causes directly linked to the destruction of our habitats by deforestation, urbanization and industrialization. It is true that Trump is not the only one, far from it, to skip out on this necessary reflection of humanity’s relationship with nature — as, by extension, people skip out on criticizing the man who dominates as a medical authority, and with his flawed character,, has a tendency to fix his mistakes more than take responsibility and prevent them. The problem of overconsumption in our societies is one of medicine, too. In fact, it is “a bit conceited to say that a vaccine is the solution to the current crisis,” as the biologist and humorist Boucar Diouf said in an interview with Devoir.

It is surprising nonetheless that people are not more insistently demanding that Trump resign. What an odd democracy the Americans have. The voters that endure will judge at the polls in November — that is, if they go to the polls at all — having to deal with authorities and jobs. The president, who has no respect for the rule of law, may even decide not to accept the results at all if he loses.