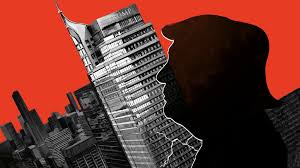 The bombshell didn’t make much impact at the beginning of summer. However, the revelation from Christopher Steele, a former British Secret Service spy, to the U.K. Parliament’s Intelligence and Security Committee in 2018 that the Kremlin had a “likely hold” over Donald Trump and his family exposed an entanglement that Russia planned for over five years.

As he explained, two years earlier this dangerous liaison had fueled the country’s orchestrated campaign of influence with the aim of winning the presidential election for the American billionaire. He added that Theresa May and Boris Johnson had chosen to turn a blind eye to the serious allegations put forward by a sound MI6 source for fear of offending the American president.

Of course that doesn’t surprise Fabrizio Calvi, a French journalist who has been investigating corruption, unscrupulous behavior by those in power and organized crime for many years. His book “Un parrain à la Maison-Blanche,” (A Mobster in the White House) was published today in Quebec. “Former CIA chiefs with whom I’ve spoken also believe that Trump is a Russian Secret Service ‘asset,’” he said over Skype. Le Devoir joined him last week as he was passing through Morocco. “Since the beginning of his White House tenure, his foreign policy has favored the Russians. He succeeded in getting them into Latin America via Venezuela. He supported Brexit which was partly financed by the Kremlin to bring about the breakdown of Europe and NATO. He wants to pull American troops out of Germany. He is astonishingly indulgent of Putin. And he doesn’t even hide it.”*

Since Trump’s 2016 victory over Hillary Clinton, plenty of words have been used to describe the former reality TV star and real estate mogul turned most powerful man in the world. But for Calvi, the most appropriate ones are without a doubt “crooked” and “shady,” due to his close links, both in the U.S. and elsewhere, to the most sinister, mafia-associated people. His investigation into the unscrupulous president who owes his career and influence to organized crime illustrates this.

“The links between the mafia and American presidents have always been there,” the critic said. Joseph Kennedy, JFK’s father, worked for it while the Chicago mafia won the presidency for his son, John Fitzgerald. The campaigns for Richard Nixon, Ronald Reagan, George Bush and Bill Clinton all profited from the mafia’s generosity, but these alliances were one-offs. What we are dealing with in Trump’s case is a much deeper, systematic, and crucially longer-lasting relationship.”*

To get into the New York real estate market at the end of the 1970s, the “corruption” route was inevitable, and Trump jumped in feet first, the investigative journalist explains in his book. “His first business deal in 1976 came from the Mafia lawyer Roy Cohn,” he says. “It was suggested to him that he be the straw man for the mobster Meyer Lansky, one of the founders of the American mafia, when purchasing a hotel in Miami. The transaction didn’t come about, but Trump has never denied having been involved.”*

Trump’s real estate empire was built to perfectly coincide with Mafia interests who controlled the unions, transport and access to materials. In Trump Tower, John Cody, the head of the Teamsters union and one of the era’s underworld figures, got hold of three luxury apartments simply to get the future president’s business up and running. Like we said, right at the heart of it.

“His relationship with the Russian mafia began at this time,” says Calvi, as Trump gets closer to Tamir Sapir, a Russian immigrant and electronics wholesaler who would provide TVs for 200 rooms at Trump’s Grand Hyatt hotel. He would be the go-between and then facilitate the Mafia’s route from their home country to Trump’s apartments to launder money. Calvi reports in his book that in the Trump Tower in New York alone, the FBI discovered 1,300 suspicious sales. The mogul’s other properties, like his Atlantic City casinos, were used in the same way. This proved to be a costly collaboration for Trump, who went bankrupt four times.

The Draw of Evil

“When he got to the White House, he was in debt to the tune of $2 million,”* the writer says. “And it was the Russian mafia, with links to the Russian Secret Service, who bailed him out,”* he adds. That played out with intervention from Deutsche Bank and a loan “underwritten by a Russian state bank headed by a friend of Putin. Never has a president owed so much to organized crime,”* and never has a man so compromised been so spared justice. Not forgetting that in the 80s he flouted his country’s environmental laws by having an asbestos-filled Manhattan apartment block decontaminated by illegally employed Polish workers, and disposing of the waste in the Hudson River.

“He was money laundering on a large scale and he still came out of it,”* says Calvi. Because he’s a warrior, a fighter who’s always at war. That is how he has survived 40 years of collusion and corruption with the Mafia. He wants to win, and he was close enough with key figures in the Mafia to allow that. This is not an ordinary businessman. One of his friends said that making money for the sake of it didn’t interest him. He wanted to feel danger. He wanted to cross the line. He had to steal something.”

This is an attitude from the occupant of the White House that puts democracy in an inevitably worrying position when he seeks reelection in November. “If he manages to do that, things will carry on as they are now,”* says the critic. “Worse, no doubt. Trump feels he can do anything. He feels protected. This fellow has an astonishing sense of impunity, profiting as he does from an American system which has equally never been so corrupt.”*

“People call this presidency a reality show,” Comedian Bill Maher once said on HBO. These words are included in the book. “It’s more like a Scorsese movie. Everything Trump does is modeled on the mob … He’s so much like a Don, his name is literally Don.” President Don.

*This quote, though accurately translated, could not be verified.

About Hannah Mosford 32 Articles
Hello! I am a French to English freelance translator currently living in Valencia, Spain where I am trying to improve my Spanish. I am originally from the UK and I enjoy visiting new places, especially cities, and meeting new people. My biggest love, however, is reading and I will read books of any genre but particularly crime. That said, my favourite authors are Zadie Smith and Elena Ferrante.