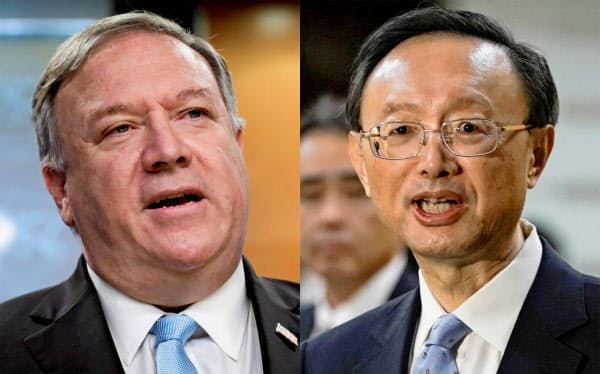 U.S. Secretary of State Mike Pompeo completely rejected China’s claim to nearly all the resources of the South China Sea on July 13, the first time America has done so.

In addition, America has twice sent two aircraft carriers to the South China Sea this month and undertaken large-scale exercises. The Chinese military is also expanding its activity, and the stench of war is building over the sea.

But a substantial change is occurring in Chinese-American relations that is more worthy of attention than this confrontation. This is the increasing spread in America’s administration and Congress of the doctrine that the Chinese Communist Party is evil.

This view of the conflict can be summarized as identifying the CCP’s dictatorial system as the main culprit behind China’s repeated violations of human rights and international rules.

It may not sound like anything out of the ordinary, but it is an extremely harsh, Sinophobic view. This is because it may lead to the conclusion that dialogue and pressure won’t be enough to change Chinese behavior and that the CCP system itself must change.

This sort of Sinophobia appeared on May 12 in this column, but it pointed out that it was not a mainstream point of view in America’s administration or Congress. Yet according to American diplomatic experts, a view of the CCP as evil has infiltrated even these central pillars.

One manifestation of this in the past month is the contents of several Sinophobic speeches by American officials. They are surprisingly blunt in their open hostility toward the CCP and its leadership.

The first salvo came from Robert O’Brien, the national security advisor, on June 24. “The party General Secretary Xi Jinping sees himself as Josef Stalin’s successor,” he said. He compared Xi to the former Soviet dictator who purged millions of his political opponents.

FBI Director Christopher Wray and Attorney General William Barr gave speeches in July that viciously criticized the CCP. What follows is the gist of what they said.

The aim of the CCP is to destroy the foundations of democratic countries. To further this aim, it spies, intimidates and propagandizes as much as it wants, posing a grave threat to the American people.

This goes beyond officials. In recent telephone briefings from American governmental authorities, in which journalists also participated, statements slamming the CCP can be heard.

The focus of the two countries’ rancor until now has been commerce, high tech and maritime sovereignty. If these were all, then some kind of compromise would not be impossible.

But if the idea that the CCP is evil is pushed to the fore of America’s China policy, a deal will be difficult. In terms of people-to-people relations, this will be a fight between a side that seeks money and interests and a side that rejects the opponent’s character and personality.

According to the American press, the U.S. government is even considering banning the entry of all 90 million members of the CCP and their families.

The deepening of America’s distrust in China is caused by China’s forceful actions in cyberspace and the seas, but the coronavirus crisis was decisive. The number of American dead due to the coronavirus has topped 140,000.*

Because the CCP does not recognize freedom of the press or speech, the new coronavirus’s outbreak was concealed, and the infection spread around the world.

This sort of feeling is adrift in American society, with growing distrust of the CCP. To cover his own mistakes, President Donald Trump is pouring fuel on Sinophobic sentiment by preaching a “blame China” narrative.

So is there space for America and China to halt and move toward reconciliation? On June 17, Pompeo and China’s top diplomat, Politburo member Yang Jiechi, met in Hawaii for discussions. Consulting inside sources on this only produces pessimism.

The Americans say that China requested the meeting. If Trump’s cherished first Chinese-American trade deal could be taken “hostage,” then the American posture on Hong Kong, the South China Sea, human rights and Taiwan could be softened. This was said to be Yang’s expectation at first.

Yet Pompeo’s firm attitude did not waver, and the discussions broke down. The American government followed up by rapidly imposing sanctions over the suppression of Tibetans and Uighurs and the violation of Hong Kong’s autonomy.

These sanctions cut into the CCP’s authority and differ in dimension from the sanctions imposed so far against Chinese high-tech companies like Huawei. It’s fair to say that it’s the beginning of a battle over political systems.

I can’t think that this trend would change if the Democrat Joe Biden wins the presidential election. “Being tough on China is a strategy that totally transcends party, and the Democrats also strongly support it,” says a representative of the U.S. government.** Biden’s diplomacy and security experts have recently appeared at virtual American think tank events and advocated increasing pressure on China in cooperation with allies.

There was a previous instance where America saw the Communist system as its enemy and clashed with China. This was the 1989 Tiananmen incident, when China violently suppressed demonstrations.

Despite this, China’s and America’s economies magnetically drew close thanks to China’s rapid growth; in under 10 years, they were in a honeymoon relationship and could be called strategic partners.

I don’t think there is another trigger for the same kind of restoration. Unlike 30 years ago, China has grown into a great power that threatens America’s hegemony economically and militarily. The two colossi have entered a tunnel of long-term confrontation.

*Editor’s note: While accurate at the time of writing, this figure has since increased.

**Editor’s note: This quote, accurately translated from the original, could not be verified.