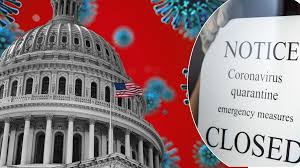 The coronavirus crisis is teaching the U.S. that a social safety net cannot be set up overnight. Supposedly “socialist” Europe benefits from its welfare system.

This week, an emergency is developing in many U.S. households. Measures such as increased unemployment benefits and temporary protections against eviction are running out. So far, the government in Washington has not been able to agree on new aid. Many people fear for their existence.

At the same time, economists like Sven Jari Stehn of Goldman Sachs predict that Europe will recover more quickly than America. This is unusual. Since 1992, the U.S. has shown higher economic growth than Europe in 20 out of the last 28 years, as data from the International Monetary Fund show. Now, the coronavirus could end the economic dominance of the U.S.

Different welfare systems also play a role in this. If the U.S. falls into crisis, companies there can lay off employees without much issue. At the same time, a social safety net is missing, which means that people seeking employment are more prepared to take jobs in other industries or accept worse conditions. Economists speak of the higher flexibility of the American job market.

In Europe, systems like short-term workers’ compensation and a well-developed social welfare program lessen the social consequences of recessions. However, stronger protections against job loss, along with welfare benefits, reduce the pressure on workers to accept offers that they consider worse. Better welfare benefits also mean that citizens pay considerably more taxes.

Because of this, the European system needs more time before the economy starts up again, and higher taxes dampen growth. This was most recently seen after the financial crisis in 2008. Consequently, the U.S. economy shrunk by 2.5%, while that of the eurozone shrunk by 4.5%. However, American wages and salaries have stagnated since then. Many of the newly created jobs offer less money and even less security.

Until recently, U.S. politicians and industry representatives have been happy to vilify alleged “socialism” on the other side of the Atlantic. However, in the coronavirus crisis, the European advantage is becoming apparent. Governments were able to send employees home without having to put up with mile-long lines at food banks and soup kitchens, which is exactly what is happening in many U.S. cities.

“European workers draw paychecks. American workers scrounge for food,” The New York Times summed up. Reporters describe the case of a real estate agent in Manhattan whose real estate agency laid him off after the business collapsed due to the pandemic. He borrowed money for rent from friends and family. Eventually, after an acquaintance tipped him off, he began to rummage through the garbage cans of a local gourmet market in order to find food that was still edible.

Many people in the U.S. are living paycheck to paycheck. Therefore, they have little savings and depend on their monthly income. Around 40% of Americans could not come up with $400 even in an emergency, according to a survey by the U.S. Federal Reserve in the past year.

This is not due to frivolous spending, because while income has stagnated in the past decades, the cost of living has increased—most of all, the cost of health care and education. In order to make ends meet, many must go into debt. The coronavirus crisis is making the situation worse. Still, just about half of all workers receive health insurance through their employer. If their job is gone, so is their health insurance.

The reason the crisis is hitting U.S. citizens harder cannot be explained by a lack of federal aid. After all, the government has pumped $2.7 trillion into the economy since March. However, a social safety net cannot be set up overnight. Much has gone wrong with distributing the money. Unemployment offices are overwhelmed by 30 million unemployed people. Many recipients have waited weeks for their unemployment benefits.

The U.S. Treasury paid out approximately $1.4 billion in stimulus payments to people who were deceased. The stimulus fund for small and medium-sized businesses distributed billions to large corporations, private schools, TV stars and sports teams. Black or other minority-owned small businesses, on the other hand, often received nothing.

The US Is in a Tight Spot

Many governors are, therefore, under a lot of pressure when deciding whether to order a lockdown and shut down economic activity in order to slow the spread of the pandemic. It is no coincidence that it is particularly the affluent northeast region of the country, New York, New Jersey, Connecticut and Massachusetts, which has succeeded in implementing and maintaining these measures. The flexibility of the U.S. job market is paying a deadly price in this crisis.

The U.S. is in a tight spot: If the economy remains closed, the livelihoods of many in the country will be threatened. If the economy reopens, COVID-19 infections will also rise. Some 145,000 people have already fallen victim to the pandemic.

Schadenfreude from Europeans would, therefore, be not just cynical, but also shortsighted, because if the U.S., the most important national economy in the world, does not recover, then it will be almost impossible for Europe to sustainably move past this crisis.