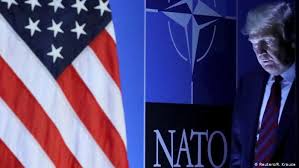 U.S. Secretary of State Mike Pompeo recently threatened to impose sanctions on companies involved in Nord Stream 2, the Russian project which will pipe natural gas to Europe, claiming that it will “expand European dependence on Russian energy supplies,” and adding that “the United States is always ready to help our European friends meet their energy needs.”

However, Europe has not shown any appreciation for America’s “good intentions.” German Foreign Minister Heiko Maas responded that “by announcing measures that will also sanction European companies, the U.S. government is disregarding the right and sovereignty of Europe to decide where and how we source our energy.” Maas added that Germany “clearly reject[s] extraterritorial sanctions.” European public opinion holds that the fundamental purpose of sanctions imposed on Nord Stream 2 is to force Europe to buy natural gas from the United States.

The disagreement between Europe and the United States over Nord Stream 2 reflects a significant change in the relationship between the U.S. and Europe in recent years. As the United States has fearlessly rejected acting in the mutual interest of other countries in favor of its own self-interest, Europeans are generally no longer as naïve about the United States as they used to be. The selfish, arrogant and hypocritical actions of the U.S. government have taught many European countries a lesson and awakened them from the illusion that the United States will always regard Europe as its stalwart ally.

The Trump administration now publicly proclaims “America First,” without considering America’s interests. From its frequent argument that Europe takes advantage of the United States to initiating trade wars when faced with the slightest disagreement, Washington clearly wants to settle its account with Europe and have it pay the United States for protection.

The United States is growing more stubborn in its pursuit of unilateralism and has abandoned the multilateralism to which Europe is committed.

The actions that the United States have been taking make Europeans nervous; from declaring that NATO is “obsolete” to encouraging Brexit, from quitting the Paris climate agreement that Europe strongly supports, to withdrawing from the Iran nuclear deal reached through years of negotiation, to pulling the United States out of the Intermediate-Range Nuclear Forces Treaty which affects European security without notice. For this reason, the French newspaper, Le Monde, pointed out that the Trump administration has created challenges for the survival of the EU.

The coronavirus pandemic has further highlighted the selfishness of the United States and destroyed the last bit of warmth that existed in trans-Atlantic relations. The United States has openly expropriated the personal protection equipment of many European countries, has tried to expropriate Germany’s COVID-19 vaccine research results, has refused to join the Global Alliance for Vaccines and Immunizations in which Europe participates. The Trump administration further surprised Europe when it stopped paying membership dues to the World Health Organization and announced that it was withdrawing from the organization, using the excuse that the organization was biased toward China. “COVID-19 has sounded the death knell for the trans-Atlantic link as built for 70 years,” says Arnaud Danjean, a member of the European Parliament.

Europe’s shift in attitude toward the United States is clearly distinguishable from the positions of France and Germany, the two engines of the EU. French President Emmanuel Macron has repeatedly called for the establishment of an “independent Europe.”

German Chancellor Angela Merkel said publicly not long ago that Europe needs to rethink its relationship with the United States if the U.S. refuses to play its global role, and recently refused to attend the Group of Seven summit of major industrial as proposed by the U.S. According to German media, Berlin is already planning countermeasures to deal with the long-arm sanctions of the United States.

Admittedly, qualitative changes will not occur in U.S.-European relations in a short period of time for many reasons. However, it is imperative for Europe to abandon its naive illusions about the United States soon, and to firmly protect its own legitimate interests.