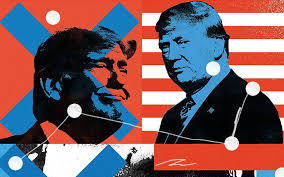 It seems that panic is slowly but surely starting to take control of the White House. Apparently, the cause of alarm is not the wretched situation in the country, but rather the presidential election.

Donald Trump has replaced his campaign manager. After a pause of several months, the American president has also resumed holding press conferences about the coronavirus at which he seems to have regained a perspective that is slightly more in touch with reality than was the case for the greater part of the spring.

In the first of the resumed briefings, he boasted that the U.S. is handling the pandemic better than “other countries,” but at the same time, with uncharacteristic gravity, stated that unfortunately things will probably get worse before they get better. A few days previously, Trump suddenly and unexpectedly came out in favor of wearing a face mask, spinning this move in one of his typical tweets, in which he referred to himself as the most patriotic and favorite president.

Trump is simply trying to change his preelection image in any way possible, and no wonder. He is trailing woefully in public opinion polls, most of which show former Vice President Joe Biden leading by double digits. In July, even Trump’s most dedicated supporters were beginning to openly doubt his chances in the November election.

The Effect of Politics on Everyday Life

It seems that Trump is starting to take the collapse of his popularity very seriously. Still, he has apparently not yet realized what lies at the root of his current failure, which is certainly not just the management of his campaign. A number of months ago, the Democrats tried to change the trend of public opinion by means of symbolic and culture wars, but failed. This strategy is now being employed by Trump, with the same lack of success. Simply put, Trump still has not realized that governing is different from running a campaign.

American presidential elections in which a sitting president runs for reelection are often referred to as a referendum on his administration. Over the last half century, the state of the economy has been the biggest factor in these elections. Of course, this year the economic situation is hopelessly intertwined with the coronavirus pandemic.

So far, Congress has been able to rein in economic collapse by means of a legislative aid package. The emergency programs introduced by Congress will soon expire, and Washington politicians have not yet been able to work out an extension. If they are unable to reach an agreement, the economic situation in America could take a sudden turn for the worse.

The responsibility for this failure lies primarily with Congress. However, Americans always place most of the blame for conditions in the country on the president, who does have great power to influence the direction and tempo of political debate. For many, Trump’s political improvisations, such as wearing or not wearing a face mask or testing the constitutional limits of federal agencies as he has been doing recently in Portland, are simply that – side issues to divert attention from the approach of potential disaster on the horizon. If Trump would begin to focus his problem-solving efforts on precisely this disaster, he could still easily win, but time is getting short.

It is still possible to find positive signs amid this chaos. It seems that Americans really do not vote on the basis of Washington battles over symbols, which are the daily occupation of the political and media elite. In elections, American voters are influenced much more by the practical effect that the actions of politicians have on their daily lives.

Four years ago, partly as a gesture of protest against the direction the country was taking, American voters chose Trump to be president. Now the U.S. is in a completely different situation. If Trump wishes to be of service to his supporters and to Americans in general, he must govern. Otherwise, they may very likely decide that his usefulness as someone who shakes up the current system and forces it to change has come to a definite end, and that perhaps he was never very good at this in the first place.

The author is an editor for Radio Wave.