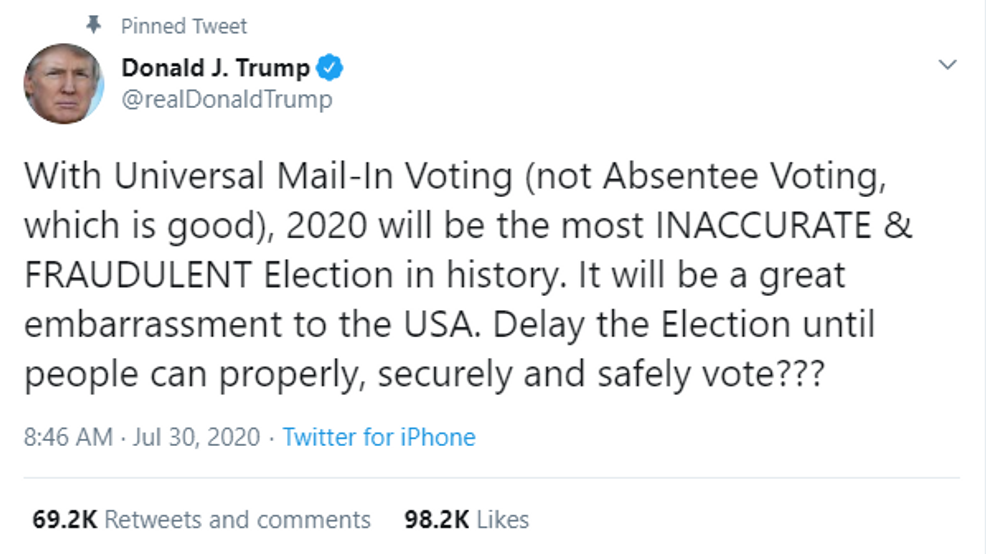 Representatives defying social distancing measures. Masks that have become signs of political affiliation. In the United States, the fight against COVID-19 has been seriously crippled by the poor quality of public debate, with disastrous consequences already materializing. Like a chain reaction, the virus is disrupting American democracy to the point of prompting concern about the upcoming presidential election running smoothly. Donald Trump’s latest tweet on Thursday, July 30, envisioning an outright delay of the Nov. 3 election, is the most recent example of such chaos.

It was already acknowledged that the 2020 campaign would be, in the words of Joe Biden, “the most unusual campaign in modern history.” Biden, like Trump, had to back out of an in-person gathering for his party’s convention. For almost two centuries, these gatherings have proven to be important moments in the American presidential race. Without meetings, and without canvassing, the campaigns will have to take place exclusively on screens, particularly on social media, where there are known risks of manipulation. But it gets worse.

Now, beyond just the campaign, it is the legitimacy of the election itself that is being challenged. Trump is blaming mail-in voting, a source of fraud in his eyes, as several states plan to use this method due to the pandemic. He already publicly declared he would not accept a possible defeat, which was just another bluff designed to mobilize the voters who are receptive to his outrageousness. Still, the last four years have taught everyone to take his caprices seriously. By instilling the virus of defiance in the middle of the election season, the American president risks adding another peril to the health and economic crises: a political one.