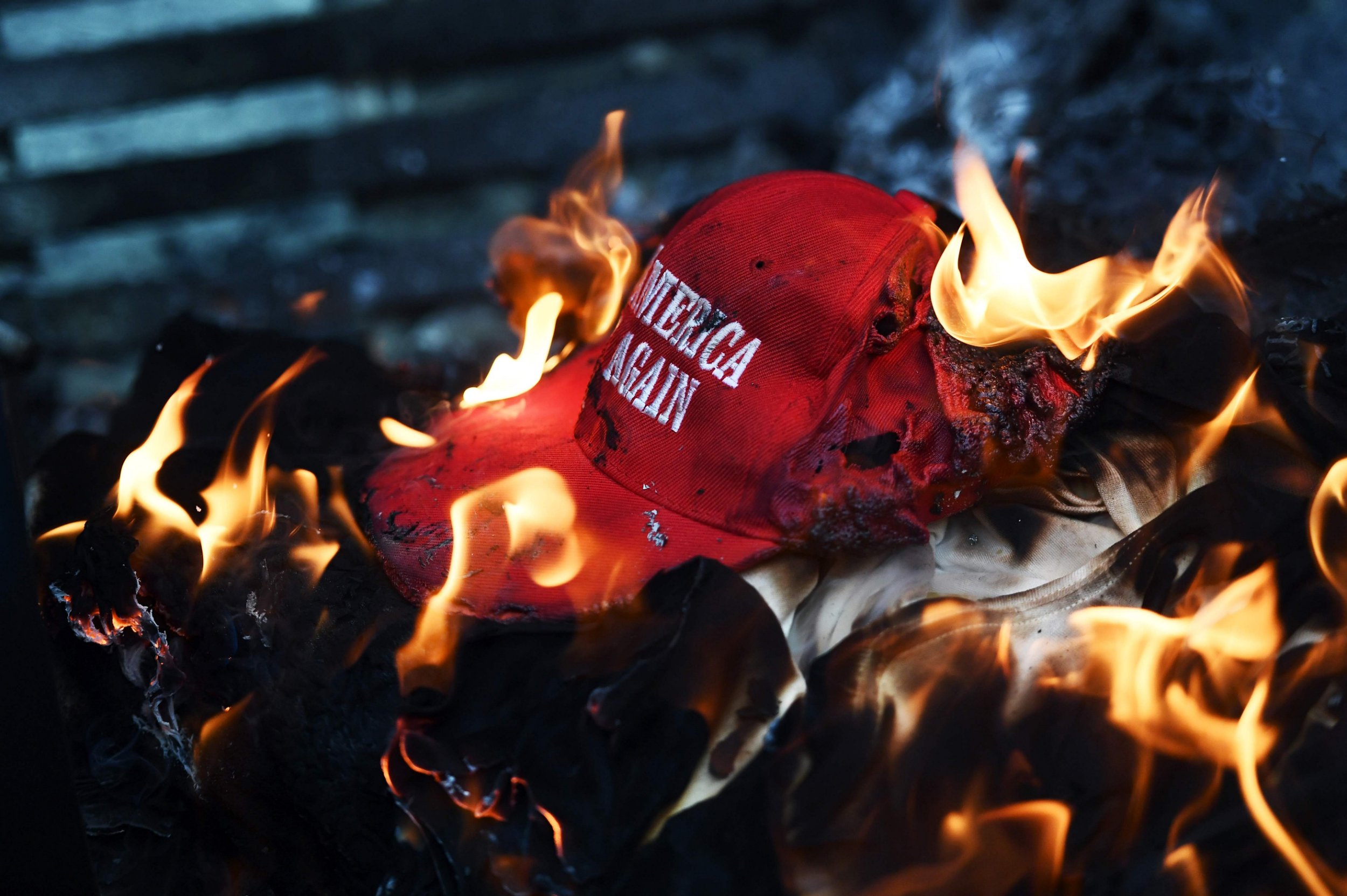 President Donald Trump used the slogan “Make America Great Again” to inspire voters in the 2016 election and “Keep America Great” in a new round of elections last year. Considering the cultural and physical achievements made by the United States in its more than 200-year history since its founding as a nation in 1776, it really does have the distinction of being called “Great.”

But now that the Trump administration has deviated from the founding spirit of the U.S., the idea of its greatness, when it is deeply mired in epidemic and racial conflict at home and internationally pursuing a neo-isolationist doctrine, may be highly divisive, even in American society. In particular, when the U.S., on the one hand, withdraws from international organizations and shirks its international responsibilities, and on the other hand, “shifts the blame” to China, stirring up the geopolitical situation in the Asia Pacific region, it is already going in the opposite direction from “Mak[ing] America Great Again.”

While the U.S. government and right-wing politicians frequently interfere in the internal affairs of other countries in the name of “human rights,” the most important human right of its own people, the right to life, has not been properly protected. In addition to the problem of gun proliferation, the poor management of the coronavirus epidemic has become a classic example of this U.S. double standard of “human rights.”

In 2020, the coronavirus epidemic has spread around the world in multiple outbreaks, with people in all countries facing the threat of the virus. On the battlefield against the epidemic, where health and life are involved, the U.S. has not only failed to carry forward its leadership role as a “superpower” in the fight but has also shirked its responsibilities, concentrated on “passing the buck” and continued to stir up domestic populism which has led to the country’s ineffective fight against the epidemic and to the U.S becoming its epicenter.

At present, the U.S has become the country with the largest number of confirmed cases in the world. But for the purpose of election politics, while the epidemic rages, the Trump administration is not taking stock of the weaknesses in the management of the epidemic, instead focusing its energies on elaborate accusations against China.

Not only does the Trump administration refuse to assume the responsibility of a major power in the international fight against the epidemic, it also smears China’s aid and support for the global fight as an effort “to gain greater economic and geopolitical benefits.”

While attacks by right-wing politicians in the U.S. may set the tone in international public opinion for a while, the countless American people who have lost family members in the epidemic will one day realize who is really responsible for its spread in the U.S.

If the American right-wing politicians who try to discredit China had respected science, faced up to the facts and put their energy into improving their own work against the outbreak and safeguarding the lives and health of the American people, the current epidemic in the U.S. would not have been so slow to improve. After all, if it cannot guarantee the basic human right to life and security of its people, how can the U.S. call itself “Great Again”?

On issues of race, America’s double standard has more obvious characteristics. American right-wing politicians ignore the long-standing systemic discrimination suffered by ethnic minorities and serious racial conflicts in their country and are intent on attacking China’s ethnic issues and religious policies. This sort of politically motivated attack on public opinion is especially noticeable this year. The U.S. House of Representatives concocted the “Uyghur Human Rights Policy Act of 2019” in a blatant attempt to interfere in China’s internal affairs with the Xinjiang-related “bill.”

Yet, “Fighting Terrorism in Xinjiang,” a Chinese documentary based on photos, videos and interviews from the front line of counter-terrorism, was banned by U.S. social media and mainstream media outlets were silent. This shows that American right-wing politicians, in vilifying counter-terrorism and de-radicalization measures in Xinjiang, are, in fact, promoting double standards under the guise of “human rights” and “religion.”

At the same time, the U.S is also trying to use the issues of Hong Kong and Taiwan to hold back China by introducing the “Taiwan Travel Act” and the “Hong Kong Autonomy Act” to directly interfere in China’s internal affairs. Why doesn’t the U.S. government put itself in someone else’s shoes? How would the U.S. feel if China introduced various extraterritorial laws to interfere in American internal affairs?

Double Standards Make the US Violate Principles of Fairness

In the economic field, the U.S. shouts loudly about free trade and fair competition while doing everything it can to suppress Chinese companies like Huawei from competing in the U.S. and Europe in a blatant demonstration of protectionism. This blatant double standard is also a great irony.

For the purpose of suppressing China in science and technology, the U.S. government has long slandered Huawei as “a company manipulated by the Chinese military” and “responsible for stealing sensitive U.S. information through technical means.”

Previously, in order to enter the U.S., Huawei didn’t hesitate to open up its source code, allow inspection of its network equipment products and enable the choice of whether or not to be served by Huawei engineers, in the hope of eliminating U.S. officials’ doubts about Huawei’s security. But this good faith did not earn U.S. trust.

At the 2020 Munich Security Conference, U.S. Speaker of the House Nancy Pelosi once again told Western countries “don’t go near Huawei” when building 5G networks. Recently, Trump publicly declared, “We convinced many countries…not to use Huawei.”

Under pressure and “persuasion” from the U.S., many countries—including the U.K., Australia, Italy and India—have already, or are currently, considering restricting Huawei’s participation in 5G network construction.

On the one hand, the U.S. is asking China to open up its market, and on the other hand, it is using “national security” as an excuse to suppress Huawei and other Chinese technology companies by any means possible. Obviously, this double standard will not make the U.S. “Great Again,” but it may make the U.S. walk into the trap of generalizing about “national security.”

The list of entities that threatens U.S. national security is getting longer and longer, which confuses ordinary Chinese people. In the past two years I don’t know if it has become convenient to use or if the U.S. really is suffering from a “security deficiency.”

Chinese technology companies, universities, students and even Chinese American scientists in the U.S. have been accused of threatening U.S. national security for no reason at all and normal scientific, technical and cultural exchanges between the U.S. and China are being blocked.

A nation can only pursue relative security, not absolute security. It is puzzling that a world superpower like the U.S. suffers from a lack of security. Enemies are self-fulfilling prophecies and deliberately creating enemies for itself will not make the U.S. safer or more united. The U.S. is bullying several Chinese technology companies in the name of national security and the bullying is obvious. However, Chinese technology companies are not weak and they have the support of countless Chinese people behind them. If the U.S. really is suffering from a deficiency in its security then it should understand that the antidote is not here in China.

Double Standards Undermine the Civic Foundation of Both Countries

Bonds of friendship between nations depend on the closeness of the people, and feelings between people develop mutually. When the U.S. promotes anti-Chinese sentiment in its country it is also rapidly loses the support of the Chinese people, cutting the historical memory of the two peoples and breaking bonds. This is precisely the result of the U.S. government’s constant demonization of China with its double standards. Today, right-wing politicians in the U.S. are trying to “decouple” industrial supply chains. They cannot comprehend that in that chain there are countless ordinary workers who are settled in their jobs. The U.S., which has always held high the moral banner of human rights and universal values, will not be a great nation if it is willing to abandon morality, fundamentally betraying the spirit of its founding. Now people from around the world, including China, want to see the U.S. become a country that takes on its international responsibilities, and hope that it can get itself out of the epidemic as quickly as possible, commit itself to development and solve its domestic social problems. However, if the U.S. government continues to uphold double standards and waste its great power attacking China, the U.S. will not be “Great Again.”