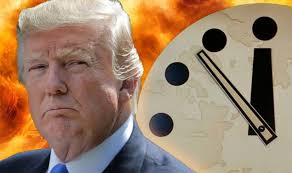 The United States is commemorating the 75th anniversary of its nuclear attack on Hiroshima and Nagasaki in the worst way: by weakening nuclear arms control.

Following the absolute horror of these attacks and after narrowly averted crises such as the Cuban Missile Crisis of 1962, both Americans and Russians understood the necessity of slowing down the arms race; of agreeing on certain rules to make mutual annihilation less likely.

However, President Donald Trump is now attacking this legacy.

For the past few months, he has been threatening not to renew the Strategic Arms Reduction Treaty with Russia, originally signed in 1991, renewed in 2010, and due to expire next February.

Last spring, Trump also announced his intent to withdraw from the Treaty on Open Skies. In force since 2002, this agreement allows states to monitor each other’s nuclear arsenal.

And finally, in 2018, Trump withdrew his country from the Intermediate-Range Nuclear Forces Treaty. Signed in 1987, this agreement restricts ballistic and cruise missiles.

We should also add his decision to pull out of the Iran nuclear deal, as well as the inability of any American president, including him, to thwart North Korea’s nuclear ambitions.

Of course, it would be unfair to blame it all on President Trump.

Russia violated a number of treaties, such as the agreement on intermediate-range missiles. And these violations cannot remain unpunished forever. Jeffrey Edmonds, National Security Council director for Russia under Barack Obama, recently opined to Vox that the president had made the right call.

As for withdrawing from the other two treaties, the United States gives the same answer: China.

The world is changing, Trump says. China wants to build up its nuclear arsenal. It must therefore be included in treaties.

This seems legitimate, for after all, China is getting more powerful, although it has not yet proven it can be trusted. But according to several experts, this doesn’t justify American excuses.

First of all, the United States and Russia together own more than 90% of all nuclear weapons. A country that now has considerably fewer nuclear weapons than the U.S and Russia will be skeptical of their demands.

In addition, the timetable for China to join these treaties seems ridiculously short.

The demand for China to join START appears to be “either a poison pill or at best a delaying action,” according to Thomas Countryman, the State Department’s former No. 2 arms control official, in a Foreign Policy interview last April.

Russia doesn’t have the means to win another arms race. This probably explains why it wants to renew the treaty on strategic arms reduction. It is possible that Trump is using this advantage as leverage and that he is threatening not to renew the agreement to obtain other concessions.

If this is indeed his strategy, it is a risky one.

We don’t want to sound alarmist. The planet is obviously not on the brink of apocalypse. Nevertheless, it might distance itself from one more quickly.

That is the conclusion of the Bulletin of Atomic Scientists at the University of Chicago. Every year since 1947, the group has been updating its “Doomsday Clock.” Midnight represents the end of the world.

The reason is that given that the threat of climate change and cyberwarfare is greater than ever, nuclear weapons are increasing and treaties are weakening.

In a famous editorial published the day after the attack on Hiroshima, Albert Camus denounced the “greatest level of savagery” reached by our civilization.

“We will have to choose, in the more or less near future, between collective suicide and the intelligent use of our scientific conquests,” he declared.

Time has not proven him wrong.

About Mireille Dedios 16 Articles
I’m an independent French translator based in the Boston area, certified by the American Translators Association (French into English). I honed my translating skills as part of the executive teams of various French and US companies, including State Street Corporation, where as a member of the Public Relations team, I tracked the news media globally and translated press releases into French. I enjoyed this work tremendously and continue to look for opportunities combining translation and news coverage, culture, history and international relations.