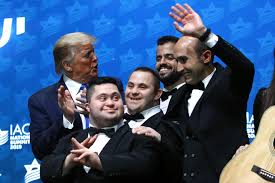 President Donald Trump demands unconditional allegiance and tolerates no dissent – many have already left him as a result, and the Republican Party is composed almost entirely of his fans.

As different and dramatic as the resignation of White House counselor Kellyanne Conway might be, it is just one more in a long series of White House staff turnovers. Many former allies have turned away from the president since he assumed office; others have been fired. That’s not a coincidence.

Trump demands unconditional loyalty and tolerates no dissent. A consequence of that is a party beholden to Trump supporters, which is becoming apparent at the Republican National Convention this week. For all intents and purposes, there is only one significant speaker: Trump.

He will praise himself daily and celebrate his political successes. He will not spare his opponents from verbal attack. Once again, his tweets and remarks will provide the headlines in the U.S. where competing news networks vie for viewers.

With this, he will excite his supporters in the United States. However, it is anyone’s guess whether or not he will be able to prevent his own downfall. Trump still trails behind his challenger, former Vice President Joe Biden, in all the polls.