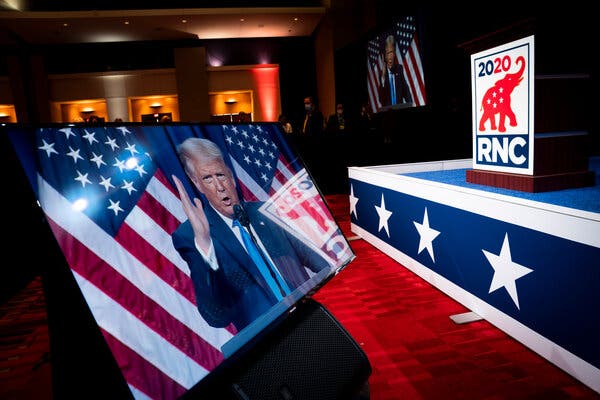 The Democratic and Republican conventions have always been mass spectacles that helped to launch presidential candidates. The pandemic has changed everything — now, the “show” will be virtual.

Can we say that the U.S. presidential election has begun now? Under different circumstances, we would have already been following the headlines and polls for a year in the race to the White House, but 2020 is not just any old year. Nevertheless, with less than three months to go until the voting booths open on Nov. 3, and on the eve of the national conventions of both the Democratic Party (Aug. 17-20, in Milwaukee, Wisconsin) and the Republican Party (Aug. 24-27, in Charlotte, North Carolina), the moment is ripe for an analysis of the political contest between Joseph Biden and Donald Trump.

This time, the conventions are not going to be crowded affairs; it cannot be any other way due to the risk posed by the COVID-19 pandemic. Instead, they will have to meet the requirement of officially announcing the nominations of Biden and Trump, while at the same time trying to appeal to and mobilize the public in this undeniably strange election campaign.

What Are the Conventions For?

If the Republican and Democratic candidates are already known, what is the point of the respective conventions? It is true that not everything will have been decided before arriving in Milwaukee or Charlotte, but this does not exempt the conventions from being formal procedures. The candidates of both parties need to be officially announced. When, as in the present case, there is no disagreement, the convention is the embodiment of unity and operates as a huge campaign event.

Conventions have evolved over time, thanks to communication and transportation advances. During the 19th century, in a reflection of the federal nature of the United States, national conventions helped to link important national leaders from both parties to the interests of the various states and territories. The delegates that came from each voting district offered their support to the candidate that could best attend to the interests of local people and the elite members of their party. Conventions during the 19th century were conducive to compromise and agreements made behind closed doors.

In the 20th century, these political rallies became more participative and representative; delegates had less room in which to negotiate, and found themselves increasingly tied to the results of the primary elections in each state. (Primaries were gradually consolidated over the course of the 20th century.) Notwithstanding that development, the social and political turbulence that the United States experienced in the ‘60s and ‘70s was still felt on a couple of occasions. For example, there was the convention where the Democrats debated between nominating John F. Kennedy or Lyndon B. Johnson in Los Angeles, 1960, and the Republican National Convention of 1976 in Kansas City, where Ronald Reagan challenged President Gerald Ford. The tension felt between the base of supporters – who are more active and more ideologically committed – and the elite of the two parties characterized those years.

These contested conventions proved to be a great spectacle for television, as they were able to launch presidential candidates, giving them access to voters’ living rooms over the course of consecutive evenings. However, they could also erode any possible confidence in a candidate who faced staunch opposition, perhaps even within his own ranks.

The lesson that divisions in a party have a high price in the voting booth ushered in the most recent change to these party gatherings, which by the end of the 20th century and the first part of the 21st have become media spectacles designed for television and internet consumption. After the long cycle of caucuses, primaries and debates in the months prior to the conventions, the screens must show smiles and unity. These days, conventions are a political show. Delegates have lost their importance and given it over to special guests.

Nowadays, the organizing committees devote themselves to finding familiar faces with whom the voters can more closely identify. Consequently, the stages of the massive convention centers have been increasingly populated by social leaders, activists (who foreshadow the themes of the campaign), celebrities (actors, singers, etc., who lend their charisma to less sympathetic candidates), elected party officials (who use their speeches to announce their entry into national politics, building reputations and fame that harbor future aspirations), the families of the candidates and, of course, the contenders for president and vice president. The key word is endorsement. In other words, support: smiles all-around, plenty of pats on the back, choreographed poses and well-rehearsed speeches. The aim is to gather as much momentum as possible from the three-day television spectacle and head out from the convention with poll figures on the rise.

It is important that all of the above, as superficial as it might seem, go according to plan. Hurricane Gustav robbed airtime from John McCain on the news channels in 2008; and, therefore, a last opportunity to close the gap with Barack Obama. Four years ago, Hillary Clinton’s campaign was undermined during the Democratic National Convention by the rejection of those loyal to Bernie Sanders and the left wing of her party. Elsewhere, it is becoming increasingly difficult for Republicans to find celebrities and musicians who are sympathetic to their causes. Although, four years ago, they found the answer to that problem: their candidate was the celebrity, straight out of reality television. Back then, that was enough.

Trump against the World

COVID-19 is calling the shots, and the two national conventions are having to reinvent themselves. If, until now, part of the message of unity materialized in the crowds applauding the candidate, this time there will not be any crowds. There will be speeches; there will be familiar faces, or those that will become familiar in the future. However, the conventions are going to be virtual more than anything else. The response on the internet and on social media will help gauge how voters are feeling, and will measure their reaction to every phrase and message. Of course, the use of bots to repeat and propagate support and criticism is essentially a given.

President Trump is not happy about the prospect of empty seats and echos, and has gone so far as to request a mass audience despite the pandemic, a request that was denied by local authorities. He also floated the possibility of not going to Charlotte, taking part by conference call instead, an option which was discarded by the Republican National Committee responsible for organizing the event. An advertisement for working from home, perhaps.

Just like four years ago, Trump is ranking low in the polls. Four years ago, he ended up winning the presidency. It could happen again. Despite everything, it appears that almost nothing can stop him. He survived the impeachment process. His is a dysfunctional White House, which proceeds with a combination of tweets and infighting. However, there is a recalcitrant enemy: the pandemic.

The president’s slow reaction to the outbreak, underestimation of its impact, and rejection of masks and other precautionary measures all weigh against him. Furthermore, the coronavirus has directly affected Trump’s pride and joy: the economy and job creation. Without economic growth, Trump is having to sell his favorite product once more: his own personality. Far from having become more moderate through the exercise of presidential duties, he continues to be all “fire and fury.” Have voters grown tired of Trump’s temper tantrums and Twitter fights? Who knows? Trump and Mike Pence will take the defensive approach in their political message that with a heavy hand, both of them will stop those who want to destroy the United States, a category in which immigrants, China, protesters (peaceful and violent), terrorists and of course, the Democrats, all fit nicely. They will also say that once COVID-19 passes, Republicans are more capable of leading the recovery and restoring economic growth. Moreover, it remains to be seen whether Trump will once again voice his lack of faith in electronic voting, insist on trying to delay the election or be willing to acknowledge defeat.

The Democrats began this year wracked with doubt. The impeachment charges they brought before Congress were damaging to them, and only helped keep Trump supporters mobilized and active. The Democrats did not have a clear candidate, and Sanders, just after a heart attack, did not seem willing to acknowledge his possible defeat. It was as the Democrats had not learned anything in the last four years.

However, months have passed since then. Although doubts may persist, the situation seems to have resolved itself to their advantage. In Biden, the Democrats have found someone who is the least likely to be a bad candidate, and someone who is capable of momentarily satisfying both the left and the center of the party. His good work as vice president under Barack Obama makes up for his track record of gaffes, something he is prone to do whenever he is in front of a microphone.

His choice for vice president is Kamala Harris, a daughter of immigrants, a woman, a person of African heritage and a senator for California. In the midst of racial tensions after the death of George Floyd and the resulting protests, her place on the ticket is a gesture for mobilizing as many demographic groups as possible so they feel included in the campaign. If Harris manages to be the magnet the Democratic Party hopes she will be, they might already have a candidate for the presidency in four years, regardless of what happens this November.

The presidency of the United States will soon be decided, so the campaign debates are more important than ever. The presidential election is between two white men in their 70s: the candidates for the vice presidency have never seemed more crucial.