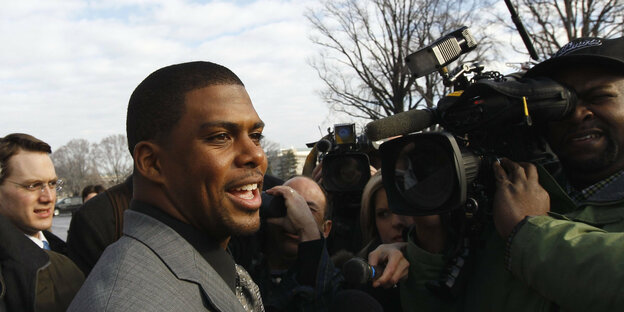 Jason Wright of the Washington Football Team is the first Black president of an NFL team in history. His task is a complicated one.

There is news that shouldn’t be newsworthy but is treated like a sensation nonetheless. Some 70% of players in the National Football League are Black. The fact that on Monday, as the first Black person ever, Jason Wright became the president of one of the 32 national football franchises tells us everything about racist admission restrictions regarding high-level positions in the league with the highest turnover worldwide.

Last December, the owner of the Washington Football Team, Daniel Snyder, hired Ron Rivera, currently one the four Black coaches in the league. And over the past few weeks, the billionaire owner has relentlessly been proclaiming a cultural shift.

The businessman and movie producer had been under pressure. Since he took over the club in 1999, he had refrained from retiring the denigrating and racist team name, the Washington Redskins. It took the Black Lives Matter protests and the sponsors threatening to pull out for Snyder to change his mind.

However, the goodwill from this reshaped image lasted a mere three days, as the club had to face new revelations from The Washington Post. Fifteen club employees complained of sexual harassment by male colleagues, which resulted in a number of dismissals and replacements. Co-owners of the club have been trying to sell their shares and are opposing majority owner Snyder.

The headstrong Snyder isn’t very popular among the fans either, given that his last Super Bowl win dates back almost 30 years. In the era of the current owner, the team stands for mediocrity.

It would be difficult to imagine a more difficult starting point for the 38-year-old Wright, the youngest president in NFL history. His area of responsibility is comparable to that of a managing director of one of the soccer clubs in Germany’s Bundesliga.

Wright is bringing athletic expertise as well as business expertise. Until 2010, he played offense for the NFL, playing for the San Francisco 49ers and the Cleveland Browns, among others. After he was appointed president of the Washington Football Team, he told The New York Times that he hadn’t been one of the world’s best players, but that not being such a prominent figure gave him time to learn from employees at the corporate office. After his career, Wright studied economics in Chicago and worked as a business consultant for McKinsey & Company.

“If I could custom-design a leader for this important time in our history, it would be Jason,” said owner Snyder. The Fritz Pollard Alliance, named after the first Black coach in NFL history, which has long since been an advocate for more diversity in the league, expressed optimism that Wright’s appointment could be the beginning of a new trend. Wright himself said that it was a “huge moment” for him as an African American to be selected as the most qualified candidate. His goal now is to create a working atmosphere that attracts the best experts.