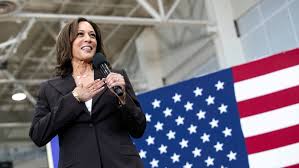 Kamala Harris is the third woman in American history to be part of a presidential ticket. First, there was Victoria Woodhull in 1872, even before women were allowed to vote, and then more recently, there was Hillary Clinton in 2016. Harris, a senator from California since 2017, is the first woman to run for vice president and the first Black woman to ever be part of a presidential ticket.* Her nomination may give Joe Biden the historical weight he lacks. Harris is a political figure known nationally for her criticism of Trump.

In a country that ravenously consumes founding myths, an old white man like Biden, a representative of the political class in America, is not marketable material for rewriting the American Dream. But, in the time of the #MeToo movement and Black Lives Matter, Harris captures the zeitgeist. Her father was Jamaican and her mother was Indian. She worked as a lawyer and, before serving as senator, she served as California’s attorney general, the first woman to ever occupy that position. She was also the second woman to be elected senator in her state, and she ran for president in the most recent Democratic primaries, in which Biden ultimately prevailed.

From her seat in the Senate, she has supported the legalization of cannabis, single-payer health care, the DREAM Act supporting foreign minors in the United States, as well as the lowering of taxes for the working and the middle class.** At the same time, she is a staunch defender of increasing the taxes of the richest 1%. Although she is closer to the center as a politician, some parts of her policy are in line with the ideas of left-wing Democrats. Even though she is far from being a radical candidate like Bernie Sanders, she is not a traditional representative of the political establishment either, as is her partner on the ballot.

When announcing the choice of Harris as his running mate, Biden appealed to the memory of his son Beau, who passed away from cancer in 2015. At the same time, his speech was more closely aligned with the expectations held by the base of his party. He referred to how Beau and Harris they both “took on the big banks, lifted up working people, and protected women and kids from abuse.” However, Harris is not the most “radical” candidate who could have been chosen by the opposition. Although there were options even more centrist than Harris, most left-wing Democrats preferred more progressive candidates such as Elizabeth Warren.

The Hollywood elite, aligned with the Democrats and furiously anti-Trump, supported Harris’ nomination. Trump’s response was swift: he tweeted a video in which he claimed that Harris represented the “radical left.” Playing with Biden’s statements, in which Biden calls himself a “transition candidate,” Trump stated that the Democratic ticket would only give the reins of the White House to the extreme left in the future. Trump asserted that the Republican Party will try to shake these ghosts during the campaign to force an ideological polarization, the likes of which are unheard of in recent American politics.

The die is not yet cast for the November election and anything could happen. In a country that is as divided as it is morally ruined, Harris’ nomination aims to reestablish the idea of the American dream. While trying to recover the international prestige that has been lost during Trump’s administration, Americans are facing their own history and, at the same time, charting their future. America must decide if it really wants to be the “land of freedom,” where minorities are represented, or if it wants to continue its decline. Harris can present herself as a symbol of the new American dream or, at least, help bring her country out of what many consider to be a true nightmare.

*Editor’s note: Harris is the third woman to run for vice president in the U.S., following Democrat Geraldine Ferraro in 1984 and Sarah Palin, who appeared on the ballot as the Republican party’s vice-presidential nominee alongside presidential candidate John McCain in 2008.

**Editor’s note: The DREAM Act – Development, Relief and Education for Alien Minors – is congressional legislation that would allow young immigrants in the country illegally brought here as children to remain in the country if they meet certain criteria. The legislation has not been approved by Congress.