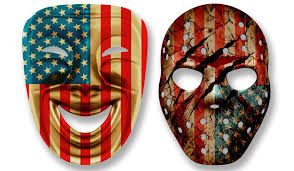 We have to get away for a while to regain awareness of what surrounds us. Otherwise, what ought to surprise or shock us seems banal, normal. It’s true here for us here just as in the United States.

For example, take my return to Montreal for the summer: My troubled observations of the rats in my alley, graffiti disfiguring one building after another and the works that eviscerate downtown—Oh, our poor downtown!—have all been met with a shrug. You get used to anything, even the worst.

Returning to Washington two months ago, I had similar emotions. The gap between what we notice all around us with new eyes, and what we hear, is disconcerting.

Everything is for the Best

For example, I heard Vice President Mike Pence on FOX News describe the choice facing Americans in the presidential election next November: A choice, according to him, between “President Trump’s record and agenda of freedom and opportunity versus a Democrat agenda driven by the radical left and Joe Biden’s vision will result in socialism and decline for America.”

Evidently when Mike Pence leaves the White House every day, as evening begins, with the dozens of vehicles that make up his convoy, he does not look around. The agenda of freedom and opportunity has been compromised by the pandemic.

Usually, at least by day, Washington bubbles with activity. Not the disorderly hustle of New York, but with the liveliness of people who have ideas to promote, deals to make, contracts to close. Only one other time in 20 years have I experienced anything else: Everything came to a halt the day after the attacks of Sept. 11, 2001. That lasted a few days; then things started up again.

I spent the last week in and around the White House and its environs. Return to normal? Forget it: no tourists, but also very few civil servants. The streets were basically empty. Offices, like many businesses, had been abandoned, and at 8 p.m., I had to finish having drinks with colleagues I had met on an unusually empty terrace, after the server came to tell us that the bar closed at 8 p.m.—on a Friday during the summer!

The “freedom and opportunity” that Mike Pence praises didn’t keep more than a million newly unemployed people, in need of assistance, from protesting last week. The pandemic gets a lot of flak, but it’s a matter of looking around yourself: The Trump administration has not helped during my eight weeks of absence.

The Democrats ended their convention on Thursday, promising something better than the current chaos. To no one’s surprise, Donald Trump had another view: “Where Joe Biden sees America darkness, I see American greatness.”

The portrait he paints of a United States run by Joe Biden portrays “the smoldering ruins of Minneapolis, the violent anarchy of Portland, the blood-stained sidewalks of Chicago.” That was Thursday in Pennsylvania. Yesterday morning, he played golf on his own course in northern Virginia.

I swear, we are developing vision problems.