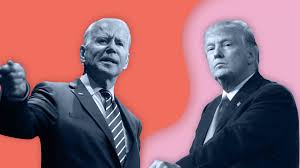 There are 70 days until the Nov. 3 presidential election. Now that the Democratic presidential and vice presidential candidates have been formally nominated to challenge incumbent Republican President Donald Trump, the upcoming showdown is heating up.

The U.S. is a powerful nation, with its leading global economy and military, and it has forged a close relationship with Japan in a wide range of areas, including economics, culture, and military security guarantees.

The Development of Usable Nuclear Weapons

In the four years since Trump shocked the world by winning the presidential election, the U.S. has touted an “America first” doctrine, and has moved away from a policy of international cooperation. The United States’ withdrawal from the Paris climate agreement, aimed at stemming global warming, is emblematic of this position. As for the person who is entrusted with leadership in the next four years, the choice of American citizens will deeply impact all of us.

From the perspective of Hiroshima, which was devastated by nuclear weapons, the Trump administration must not be allowed to pursue its nuclear policy. The role of nuclear weapons has expanded from being limited to a means of deterrence and counterstrike to the promotion of smaller scale, “usable” nuclear weapons. There are also new guidelines for the use of these weapons in actual combat.

The U.S. has withdrawn from the Intermediate-Range Nuclear Forces Treaty with Russia, and a groundbreaking pact that, for the first time in history established a total ban on certain types of nuclear weapons, was left to expire. At present, the only treaty that remains with Russia regarding nuclear disarmament is the New Strategic Arms Reduction Treaty, which is set to expire next February.

The U.S. seemingly wants to a cultivate a multinational framework for disarmament, but the reality is that it is competing with other countries, including China, in a race for nuclear weapons expansion and military buildup.

There is also continual doubt about policies concerning the unstable Middle East. While the U.S. arbitrarily pulled out of the Iran nuclear deal, which imposed a definite curtailment of Iran’s nuclear development activities, the U.S. continues to excessively back Israel, a nuclear power. Why doesn’t the U.S. realize the peril of its actions in this region?

Within America, the division of society based on racial discrimination has deepened more than ever. Will this course of events accelerate, or will it be checked? The choices are clear.

The Democratic presidential candidate, former Vice President Joe Biden, is aiming for party solidarity. To this end, he has adopted left-leaning tenets into his policy proposals, such as raising the minimum wage and easing the burden of student loan debt. It appears that he has learned the lesson from the Democrats’ defeat four years ago, in which the party failed to bridge an internal gap between moderates and the left.

Sen. Kamala Harris, a Black woman of Asian descent, is the Democratic vice presidential candidate. This choice of a diverse candidate clearly indicates that party is focused on defeating President Trump, who has been criticized for fanning the flames of discrimination.

Moreover, Biden has criticized the current administration as bringing a “season of darkness” over America in the face of racial antagonism and deepening social division. This language and these actions indicate that the party intends to seek harmony and reconciliation for the American people. In reality, police violence against Black people, including brutal killings, has been seemingly endless. It is reasonable to frame eliminating racial discrimination as a key issue.

With the goal of restoring American leadership, Biden is calling for a return to the Paris climate agreement and repairing relationships with allies. It seems that to some extent he will inherit America’s current confrontational position with respect to China, which has conspicuously repressed freedom in Hong Kong and expanded its military. Biden intends to take a strong stand on issues such as the theft of intellectual property and military activity in the South China Sea.

Currently, Biden is leading in the approval ratings. But there are some places for concern. The biggest concern is his age. If he is elected, he will be, at 78 years old, the oldest person in history to take office. He also has a potentially problematic habit of verbal gaffes, and thus, there’s an uncertainty about future slipups that can’t be ignored. Even though he has earned widespread support, he does not have many enthusiastic supporters, and the irony is that most of his support depends on a hodgepodge of halfhearted backers.

In contrast, Trump is emphasizing a track record of favorable markets and hard-line immigration policy. Regarding China, he has blamed the country for the spread of COVID-19, and has stated that he intends to bring back 1 million manufacturing jobs from China.

Trump has criticized Biden as a “puppet of the radical left,” and Trump’s reelection bid is strongly backed by a solid conservative voter base.

Three candidate debates are scheduled beginning at the end of September. The presidential debates of four years ago, which degenerated into a volley of personal attacks, were panned by one major American newspaper as being part of the basest election campaign in history. To avoid another such performance, the candidates must run on policy. At a time when social divisions continue and international cooperation stands out among great divides, what should be done? The debates must address concrete plans.