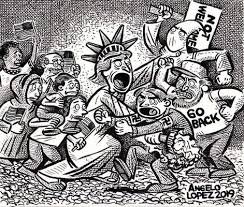 The election that takes place in November will determine not only the new president, but also the future of the liberal world order led by Washington. The Republican candidate has a chance of being reelected.

Is Donald Trump a turning point or merely a detour in the course of history? Harvard University Professor Joseph Nye asks a similar question in his last article. The November election will determine not only who will become president of the United States for the 2021-2025 term, but will also determine the future of the world order established after World War II. The election will determine whether there will be a return to the isolationism that preceded Franklin D. Roosevelt and the end of the liberal world order that started in 1945, or a reshuffling of the pieces of American foreign policy that have been in place for the last 50 years. In order to have an accurate indicator of how the foreign policy of the Biden-Harris administration could be, we have to look back to that of Bill Clinton or Barack Obama.

Trump’s isolationism, however, has some peculiarities. Donald Trump has been somewhat successful in his foreign policy, maybe even more so than his predecessor. The recently established diplomatic relations between Israel and the United Arab Emirates are proof of that. And even though Trump significantly increased his defense budget, he has been much more measured in the use of force on foreign countries than all of his predecessors since, at least, Jimmy Carter. Those close to him claim that Trump is obsessed with being awarded the Nobel Peace Prize. Although it is unlikely, Trump has — in foreign policy matters — more merit than Obama had when he was awarded the prize in 2009.

Ignoring the almost catastrophic domestic context, Trump has a serious chance of being reelected. In spite of only three out of every 10 Americans approving of his administration during the pandemic or the racial uprising against institutional violence, Trump’s opponent does not seem to have enough appeal. In chaotic times, presenting himself as the president of “law and order” could win Trump the votes of undecided voters. This is how Ronald Reagan managed to defeat Carter. Richard Nixon also won election in a context of similar social deterioration. It is true, as Nye states, that America has lost much of its soft power of attraction in international matters during Trump’s administration. However, that does not seem to be an issue for Trump’s core voters.

The turning point Nye speaks about could mean that Trump’s successor will find, next year or in four years, a world that is completely different from the world when Trump became president in 2016. Although the campaign stage remains open for now, this seems quite possible. In a world of closed borders, the questioning of liberal democracy, and the rise of xenophobic and far right-wing movements in Europe and some Latin American countries, the possibilities of Trumpism being a mere historical accident are becoming less likely.