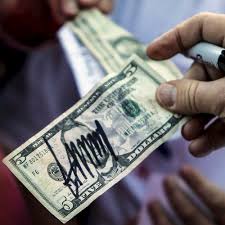 What we least thought would occur has just happened: Donald Trump, the multimillionaire, the tycoon who enjoys being known as one, the Midas who converts everything he touches into dollars, the heir to one of the great fortunes of this country , has run out of advertising funds needed to compete with his Democratic opponent.

And at what a moment: Seven weeks from the election Trump has already spent $1 billion of the $1.1 billion he has raised, and he is behind in all the polls. The Republican standard-bearer smells like what he detests so much: a “loser.” I do not mean to say in any way that he has already lost, but August’s political fundraising makes it smell like defeat.

Joe Biden was able to raise a record monthly amount for any presidential campaign in the history of the United States: $365.5 million. And in July, the month before that, the Democratic campaign collected a total of $140 million.

How did Biden’s campaign manage to collect more than twice the amount of money from one month to the next? It was the effect of Kamala Harris as his running mate, a move that was magnetized to attract funds, according to those familiar with the trajectory. The selection of Harris added 1.5 million new donors to the campaign, with $205 million contributed by online donors.

Although it is not always right, money has a nose for news all over the world. Sooner or later, that woman will be president of the United States, according to the rain of dollars now falling into the accounts of the Biden-Harris ticket.

To Trump’s misfortune, the political contribution period ends in two weeks and his funding is in crisis.

A strategy? No, they wound up without money.

For the most part, Trump’s campaign ads are calls to his followers to give money in this decisive stretch of the campaign. Bill Stepien, the president’s campaign director, has said that cutbacks in advertising are due to having nowhere else to cut costs.

From Aug. 10 to Sept. 7, Biden invested $20.5 million in the key state of Florida on “the airwaves where the election will probably be decided,” writes Josh Dawsey, a Washington Post reporter who has worked on this issue. And Trump? Only $7.8 million.

Radio is fundamental. That is where a good part of the money goes to reach voters.

In Pennsylvania, radio stations aired $17.04 million worth of Biden campaign ads, while Trump aired only $6.1 million.

In Arizona, Biden’s spending for radio campaign ads is six times greater than Trump’s and three times as much in North Carolina.

“Donald Bucks” has wound up with empty coffers.

Last week Trump said that if he has to, will use resources from his own pocket to improve his campaign’s finances, remarks which resulted in irony-laden responses in the media, remembering his record as a sloppy businessman who still won’t release his tax returns.

Biden has kept his advantage in key states by expressing concern over safety and violence, with television spots and few substantive arguments. He has expressed concern, but has offered no solutions.

Trump has moved the needle in a significant way in Florida, perhaps the only state where this phenomenon has occurred. There, Trump is within a hair of catching up with Biden, principally because of the massive support from the Cuban-American community.

Still, at the key moment, the real estate tycoon has wound up without cash. And that counts more in the United States than in any other place.