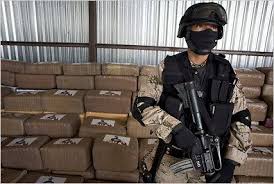 In her government report, Hermosillo Mayor Celinda Lopez bluntly recommended a new way of dealing with organized crime in Sonora. “Traitors to the country should be shot for poisoning children and young people. Drug traffickers should be shot in this country the same way they are in other countries in the world. Are we going to continue being one of those negligent governments that either are fearful or incapable of confronting the situation? Or will we dare to step forward to actually remedy the situation in Hermosillo?” Lopez asked.

Something must be happening in Hermosillo that is preventing the “hugs, not bullets” approach* from working for the mayor. And one has the feeling that something similar is happening in the rest of the country.

“Mexico needs to do more to stop the flow of deadly drugs entering our country. We need the Mexican government to intensify its efforts to increase poppy eradication, illicit drug interdiction, prosecutions, and asset seizures, and to develop a comprehensive drug control strategy. In particular, Mexico’s full cooperation is essential to reduce heroin production and confront illicit fentanyl production and every form of drug trafficking, including through United States ports of entry. Many Mexican military and law enforcement professionals, in cooperation with their United States counterparts, are bravely meeting this challenge and confronting the transnational criminal organizations that threaten both of our countries. We need to see a sustained and unified commitment from Mexican government officials across military and civilian agencies and working with foreign partners. Without further progress over the coming year, I will consider determining that Mexico has failed demonstrably to uphold its international drug control commitments.”

In the midst of this, next year’s budget has eliminated one of the funding sources used in the municipalities to train and equip police officers, confirming that the government believes only its forces — the military and central authority — can end the tragedy that began more than a decade ago.

I bet that everyone who knows about this from international experience will say this won’t work, that security is built at the local level.

Faced with all this, the mayor has made it clear. Shoot them all. Mexico 2020. Hope it works out well. Wear your masks.