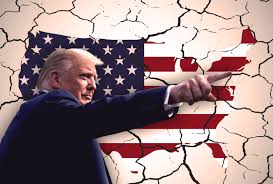 This, I believe, is the best way to understand the situation in the United States and its tremendous consequences for the world.

Although both campaigns are spending billions, although the politicization of the mass media and social media is extreme, and although each public decision is manipulated according to the upcoming election, practically no one will change one’s vote on Nov. 3 in the United States.

Donald Trump’s supporters and opponents live on two different planets; two self-contained universes where each success, each word, and even each fact is understood in a diametrically opposed way.

And the problem is hardly just one of ignorance or misinformation. A second term for Trump would endanger the very existence of the country that rejects him, and his defeat would imply the end of the country that claims him for their own. This is why we are facing an undeclared civil war, not just a highly polarized election.

This war has eroded the credibility of all institutions that operate under the rule of law. Congress is at a standstill, justice is politicized, justice, intelligence agencies are discredited, the military is in the streets, there is police abuse, partisan journalism, an abundance of “fake news,” and the apparent rejection of science.

Even more so than the Civil War of 1861-1865, this unarmed war is already knocking down the basic building blocks of a democracy. With the start of voting, more than 60 lawsuits have been filed against mail-in ballots and other aspects of the electoral process. Some of these claims may reach the Supreme Court, where the decisive vote would be that of the justice … whom Trump nominated Saturday.* Worse still, Trump keeps saying that there will be fraud and he won’t promise to respect the final ballot count.

Furthermore, this war is occurring in the midst of a threefold crisis, one of the most serious in the history of the United States. It’s the country with the highest number of deaths from COVID-19 anywhere in the world, the recession caused by the pandemic is the worst in at least a century, and racial struggles have returned to where they were in the 1960s.

There has never been such hopelessness, such hate, or such rage before in the oldest democracy in the world. Perhaps there was during the Civil War in 1861, but back then, the United States was nowhere near the No. 1 power it is today, the indispensable country — as internationalists say, the architect of the global village, “the country we can all call home,”** as Walt Whitman beautifully wrote on behalf of all immigrants.

Trump isn’t the cause, but the epitome of an undeclared war that has been slowly brewing for many years. A war that arises from the natural character or the peculiar traits of a country that have become potent: religiosity, federalism, slavery and individualism — the four key catalysts that, from my judgement, are leading to this undeclared civil war.

That’s why, whether Trump wins or Joe Biden wins, this civil war will continue for a long time, negatively impacting the United States and causing turbulence for the entire planet.

*Editor’s note: Trump nominated Amy Coney Barrett to the Supreme Court on Sept. 26. The nomination must be confirmed by the Senate

**Editor’s note: This quote, although accurately translated, could not be verified.