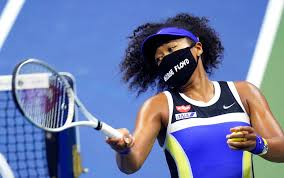 She had seven black masks prepared for each of the matches until the finals. She used each of them and came out on top. Each of the masks contained the name of one of seven Black people who died because of police brutality.

Watching as Naomi Osaka let out all her feelings at the U.S. Open Tennis Championships made the following poem come to mind. It’s a piece called “Existence” by Hiroshi Kawasaki and ends like this:

Everyone leads one’s life with one’s name. I think the verse is meant to say one should not reduce precious lives to mere numbers. This also goes for the memorial I wrote about three weeks ago, in which the names of Japanese victims of Siberian detention facilities after World War II were read.

Fight against forgetting. Make them remember. Let them know. Make them think. I learned from the reporting that Osaka had a similar intent.

Her actions make people notice something, that just because it’s not happening to you doesn’t mean it’s not happening. I don’t think I’m the only one who, after seeing the posts on Twitter in May, was surprised by the ignorance and lack of interest in the suffering of other people, even to the extent of racism against Black people.

After Osaka won, I pulled out my translation of “Regarding the Pain of Others” by Susan Sontag, an American writer and critic who passed away in 2004.

I had underlined this section:

“To set aside the sympathy we extend to others beset by war and murderous politics for a reflection on how our privileges are located on the same map as their suffering, and may — in ways we might prefer not to imagine — be linked to their suffering, as the wealth as some may imply the destitution of others, is a task for which the painful, stirring images supply only an initial spark.”

She’s saying that it’s important to think like that.

“Privilege” doesn’t mean having wealth or high class. For example, we in Japan, a country governed quite peacefully, are in a position where we can watch news footage of people far away suffering, without ourselves being repressed, starving or fearful of war. This is what it means. It means us.

Sontag says that sympathy is irresponsible, because even if it is well intentioned, “so far as we feel sympathy, we feel we are not accomplices to what caused the suffering.” It’s not my fault that outrageous things are happening, and there’s nothing I can do about it — surely she means this sort of awareness. Now that I think about it, sympathy incorporates a sort of sweet acceptance.

To events far away”

People have a “beautiful” sense of justice to outrageous things happening far away.” However, the anger and empathy for the pain of others which they feel at those moments tends to end just at the level of sentiment and emotion. Now I wonder how subjectively I’ve been thinking about racism. I have to question myself here, lest I run the risk of taking in Osaka’s actions as comfortably as a movie scene and that’s all.

It’s been about 80 years since Charlie Chaplin’s film “The Great Dictator” was released in the U.S. In an era where the dark clouds of fascism were looming around the world, the famous speech, rich in humanism, at the end of the movie struck at the hearts of those in the audience:

Every word resounds with me today, far into the future from when this movie came out. The brilliance of these words, however, may also be proof that much outrageous misfortune has not disappeared from the face of the earth. The country you were born in, and your skin color and sex at birth, even in our 21st century world, dignity is still fragmented by these things.

I also hear that Osaka was criticized for her masks of protest, but I’d like to imagine that these words were ringing in her heart when she took her courageous action: “As long as you wait for other people to start, no one will ever start.” This unforgettable truth was left for us by the French anti-war philosopher Alain.