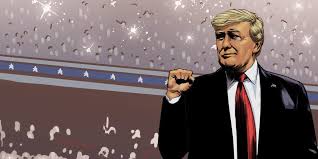 Kayleigh McEnany, the White House press secretary who claimed Donald Trump would never allow COVID-19 to reach America, has tested positive. McEnany is the latest in a long line of infected White House employees; only a few hours before making the test results public, she had addressed journalists without wearing a mask, a precaution which, even after Trump’s hospitalization, remains optional.

The list even extends to the households of those infected. Claudia Conway, daughter of Kellyanne Conway, tested positive after being in contact with her mother. After all of this, the White House has still offered no guidelines on how to manage the emergency, which it is now at the center of. Staff members talk of having no protocol, of not knowing if they should isolate or go into work; they are being left to their own initiative about everything.

Michael Shear, White House correspondent for The New York Times and one of the journalists who tested positive following the event that infected half of Washington, revealed to CNN that he had not undergone any checks or contact tracing from the Trump administration. “It just shows you that they’re not […] taking it seriously,” he told CNN, and The Donald is doing nothing to refute this image.

The president seems set on one unchanging objective: downplaying the emergency, even when it affects him personally. Minutes after having admitted on camera that he had learned a lot about COVID-19, the real estate tycoon thought that the best thing to do for a patient in isolation as a result of a potentially lethal virus with no cure was to head out in an SUV, with a driver and Secret Service escort, to wave at his supporters. The result of this great adventure was that everyone involved then had to quarantine, having been exposed to infection.

“I never thought I could be so pissed off at someone who had COVID-19,” tweeted New York hacker Emmanuel Goldstein, radio host and founder of the magazine 2600, echoing the thoughts of many Americans, who are asking themselves why the rules of the pandemic don’t apply to everyone. There’s mounting rage among ex-COVID patients and their families seeing the level of treatment accessed by Republican deniers like Trump and the ex-governor of New Jersey, Chris Christie, who was hospitalized “in an abundance of caution.”

“These people get treatment that no one else can access,” says Emma, 37. “My brother-in-law died at home because when we arrived at the hospital, his illness was not thought serious enough to be hospitalized; even now, if you have mild symptoms and live in New York, you will not be admitted to hospital. You will receive a follow-up, yes, but you won’t get a 4-room suite funded by taxpayers.”* How Trump is coping with the illness remains a mystery. The president’s doctors have admitted that his condition is more serious than publicly stated; the White House doctor, Sean Conley, suggested it was understated so as not to anger Trump.

This can only stir up doubts surrounding his current condition. Indeed, Trump was treated with dexamethasone, a drug administered to critically ill patients, and external health experts claim they can’t ascertain if Trump is more unwell than he appears in photos, if the doctors are treating him unusually aggressively, or if the doctors are following Trump’s instructions.

What’s certain is that Trump didn’t reveal his first positive test result to the public so that he could continue attending events. By contrast, New York Mayor Bill de Blasio, who took the pandemic seriously, has expressed his wish to close venues, shops, and schools in nine neighborhoods from Brooklyn to Queens.

According to the mayor’s proposal, the closures will remain in place until the rate of positive cases in the neighborhoods does not exceed 3% for seven consecutive days.