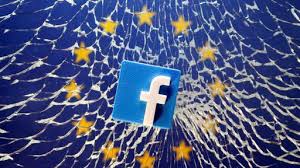 Facebook almost had a falling out with the European Union.

On Sept. 22, The Guardian reported that the CEO of Facebook said that if the EU did not continue to allow it to transfer user data to the U.S., Facebook might leave the European market.

If Facebook really does leave, it would be a big loss for both parties. Facebook has more than 300 million users in Europe; withdrawing means losing out on a huge market, and leaving those 300 million or more users with no choice but to find a new social media platform.

Now the question is why would Facebook prefer to pay such a high price and insist on transferring data to the U.S.? Wang Haibin, an associate professor at the School of International Relations at the University of International Economics and Business, said the shadow of the U.S. government lurks behind Facebook’s move which is inextricably linked to United States strategy.

As a pioneer of the digital revolution, the U.S. has stood in a league of its own with regard to the digital economy. However, as smartphones became increasingly more popular, the European and Asia-Pacific digital economies started to rise quickly. The three have become evenly matched rivals.

In order to consolidate power, the U.S. has constantly tried to lead, dominate and even remodel global regulations on international data flow. Motivated by self-interest, it tries to impose rules in its favor on the rest of the world. These rules are known as “free cross-border data flow.”

This “free,” of course, isn’t actually free. What it really means is that other nations aren’t allowed to restrict American corporations in their country from sharing user data with the U.S. government.

Where does this information shared with the government go? Just think “PRISM”* and you’ll figure it out. It all flows into the hands of U.S. intelligence agencies.

Additionally, what the U.S. is really advocating for is a double standard. No one is allowed to touch its citizens’ user data! Just look at TikTok’s bitter fate; no matter how well it protected U.S. users’ data, the government gave it a hard time.

So who actually trusts the U.S. when it says something is “free”? After The Guardian revealed the U.S.’s PRISM program in 2013, the European Parliament made every effort to strengthen legislation that emphasized regulating cross-border data flow in order to protect its citizens’ personal and business data.

Given the important position the EU holds in the United States’ strategy, U.S. officials hope to avoid war and defeat their opponents through bilateral agreements. n 2016, both sides reached agreement on the EU-U.S. Privacy Shield. This agreement allowed American companies to transfer data back to the U.S., provided they adhered to the EU’s high standards with regard to data protection.

However, in late July, an Irish court ruled that the U.S. had not adequately met the EU’s data protection standards. Thus, the EU-U.S. Privacy Shield was rendered ineffective. To the U.S., this was equivalent to abandoning all previous efforts between the two, and led to increased tension.

This is Europe’s situation. As far as Asia-Pacific nations are concerned, the U.S. is trying to build a U.S.-led free data flow group primarily through the use of multilateral agreements. In the data trade sphere, the model developed by the Comprehensive and Progressive Agreement for Trans-Pacific Partnership serves as the standard. While the U.S. still has no intention of joining the CPTPP, previous rules on cross-border data flow were inherited by NAFTA. When it comes to personal privacy protection, the Asia-Pacific Economic Cooperation’s model is the standard. Currently, the U.S. is negotiating, or has completed negotiations, with most of the member states in these two multilateral agreements. It’s all just a pretext for the U.S. to maintain its lead role in making the rules.

Given how overbearing the U.S. is, what happens if someone refuses to comply? Officials will just play the long-arm jurisdiction card as a rogue tactic. This is an old trick we Chinese people are all too familiar with. The U.S. has used many different tactics to suppress TikTok. Even if TikTok established a data transparency center in the U.S. and moved its servers there, the Trump administration would still have it out for them. The U.S.’s wild ambitions have been exposed, and all foreign technology and information companies with even the slightest ounce of strength will face suppression by America’s long-arm jurisdiction policy.

The game between the U.S. and Europe will continue, and TikTok’s affairs are still being settled. Whether the U.S. gets the final say, or the privacy of users around the world is considered more important all depends on how hard the whole world works at it, including China.

After all, it’s not like the world belongs to the U.S. The U.S. is a part of the world just like everyone else.

*Translator’s note: PRISM stands for “Planning Tool for Resource Integration, Synchronization, and Management,” and is a data tool designed to collect and process foreign intelligence that passes through American servers.