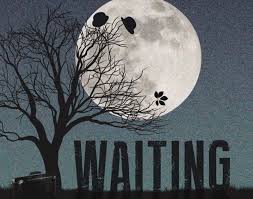 In the famous play, “Waiting for Godot,” by Irish author Samuel Beckett, two characters wait roadside for a mysterious person called Godot. Each of them dreams that Godot will change his life for the better. The irony of the play is that Godot never appears, these poor souls’ lives never change, and their situation remains, unfortunately, the same as it was.

I recall this play now whenever I see segments of the population, whether in Arab intellectual and political circles or in the general public, who believe that Joe Biden’s rise to power in the United States will change their fate, after he has courted these segments with repeated words about his support for Middle Eastern democracies or about his support for improving the deplorable human rights situation and other clichés that always appear in the campaign speeches of American electoral candidates.

These segments, who count on these promises, started cheering early in the race and issuing calls to take advantage of this opportunity to prevent the current president, in the midst of his current mandate, from winning a second one. Yet, truth be told, in the world of American politics, nothing ever changes.

A Calculus of Profit and Gains

America is unarguably the successor of the historical colonial powers in the Middle East and the world, and its multifaceted approach takes the form of several patterns and archetypes according to its calculus of profit and gains. What has characterized U.S. foreign policy are its post-imperialism, in which its policies aim to control the fate and destiny of developing countries. The American cowboy model treats others with extreme roughness and abundant self-confidence and is guided first and foremost by personal interest.

Successive U.S. regimes and administrations have had the same policy, and while its numerous discourses may have changed, the end goal has been the same, too. Whether under a peaceful president like Clinton, tough presidents like Bush Sr. and Jr., or presidents who demonstrated flexibility like Barack Obama, the approach of American foreign policy to crises remained consistent, and no one president has been able to go against deeply entrenched American institutions.

As for current U.S. President Donald Trump, he errs only insofar as he has put the ugly side of American policy out in the open for all to see, artlessly revealing what has been hiding inside U.S. institutions. He embarrassed American diplomacy by showing its support for rich dictatorships in the region, with Trump dealing with some of them as though he were sent by the public relations office and not as the president of a country that is supposedly great.

The question now is: Would Joe Biden’s rise change American policy? The immediate and direct answer is no, for the following reasons.

First, Joe Biden is the Democratic Party candidate, and until recently, the Democrats’ loyalty to Israel was a blind loyalty, unconditional, with the Zionist lobby enjoying extensive and complex relationships with a majority of the party’s leaders. In addition, American policies are generally stable towards Israel, and a majority of the political gains obtained by Israel throughout its history have come from Democratic presidents.

Secondly, Joe Biden’s courting of the Muslim bloc’s sympathy in the United States is only electoral politics, because Islamophobia is an inherent and important part of the mentalities behind American politics in particular and Western politics in general. This Islamophobia has been produced and recycled throughout long periods in academia and in specific research circles dedicated to Arabic and Islamic affairs. Nothing proves this more than the adoption of the theses of Bernard Lewis, Samuel Huntington and Francis Fukuyama in the American corridors of power. As beacons of reason in dealing with Islamic states and movements, their bigotry lies in their lack of distinction between moderates and extremists. Unfortunately, much of the writings in these theses is subjective, yet the mindset of American decision-maker treats them as self-evident truths. Neither Biden nor anyone else is capable of changing politics in favor of Muslims and their blocs, both in the short and long term.

Thirdly, Biden preaches in his frequent election speeches for a tougher line with the ruling blocs in the Arab region, which is nothing more than election rubbish. America faces a shortage of financial resources and compensates for it with the savings of some of these countries, which are made available to the United States unconditionally. Is Biden going to do away with American pragmatism, which means nothing more than its self-benefit and self-profit, in order to win the empathy and goodwill of sections of the American republic who are angry at these governments and regimes, without any advantage to the American treasury?

Fourth, Biden says that if he wins, he will work on toppling Turkish President Recep Tayyip Erdoğan, a highly naive thing to say because—whether you agree or not with Turkish policy—Turkey is a strong and effective ally to the American national security establishment, as well as a formidable player among world decision-makers. More importantly, Turkey has a long history of opposition to Russia, which has made Turkey the perpetually pampered partner of Europe and America. In their eyes, Turkey must remain a strong buffer state that prevents Russian penetration into the region. Yet, the Turkish side has become weaker due to the rise of Russian influence and hegemony in the region, as well as its encroachment on European borders, which the United States does not want. Likewise, the European Union wants to prevent Russia from regaining the foothold in Eastern Europe that it extirpated over decades with great difficulty. Turkish decision makers are aware of this point in particular, and they use it to achieve concessions from Europe and the USA.

For the above-mentioned reasons, if elected, Biden would not do away with a strong and strategic regional ally such as Turkey, thereby undoing years of progress with a historical adversary at a time when Turkey is once again rising on the stage of world powers.

Are Biden’s chances of winning greater than Trump’s? Yes, very much so. Trump will not be so lucky this second time, and chances are Joe Biden will be the 46th president of the United States. American institutions want a calm and balanced president, because the space open to all American presidents lies solely in the executive branch. This has become the worst place under the current president, because he has used it crudely. As has become increasingly clear, he has embarrassed the decision makers both in America and with respect to global public opinion.

But the most pressing question remains: Are there any significant gains if Biden wins? The truth is that there is nothing new in the American political grab bag in general. Whether Biden wins or loses, betting on significant change is naive. American foreign policy will stay consistent, both in the region and outside of it. The contentious junction points in Iraq, Syria, Afghanistan, Iran, etc. will remain as they were, as will the map of its alliances with the regimes in the region, without exception, as long as American cowboy-ism and its interests are among us.

Hani Bakry is an Egyptian writer and presenter.