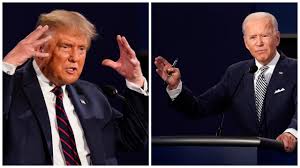 The most important takeaway from the messy confrontation between Donald Trump and Joe Biden will be the threat that the president continues to allow to hang over the validity of the Nov. 3 election. It represents a danger for democracy.

Five weeks ahead of the American presidential election, the first debate between opponents — Republican President Donald Trump and the former vice president, Democrat Joe Biden — confirmed on Tuesday, Sept. 29, all the worries that have emerged over the past four years about democracy in the United States.

The most striking moments of this brutal, chaotic meeting of the two candidates, both in their 70s, will not have been the riled exclamations of Biden toward the president who incessantly interrupted him and whom he called a “clown,” or the personal attacks of the latter on the foreign business conducted by the son of his adversary. What will be the main takeaway from this debate is the warning Trump gave at the end regarding the Nov. 3 election: “This is not going to end well.”

Once again, Trump sowed doubt on the validity of the presidential election and the absentee ballots expected in high numbers due to the COVID-19 pandemic. And, yet again, he refused to commit to not declaring victory and to calling for calm from his supporters if the result was not clearly established at the close of voting. Biden, for his part, agreed to respect the outcome, whatever it may be.

The president’s ambiguity on election proceedings is as troubling as his refusal to expressly condemn the violence of white supremacists when pressed to do so by the journalist moderating the debate — and not without difficulty. Trump limited himself to asking an extreme right group called the Proud Boys to, “stand back and stand by.”

Such a rejection of civility on the part of the president of the United States was stunning. On style, Trump’s aggressiveness and lack of discipline during this 90-minute verbal spat will not have surprised those who have followed him since his first campaign. He led the debate like he tweets, with insults, self-glorification and gratuitous accusations with no qualms. The Democrats pretend to be offended, but the president’s base appreciates his combativeness. It is to this electorate that he addressed himself in an effort to remobilize them, given polls that show him losing at this stage of the race. Biden, expecting it, had set a strategy — to remain calm and undaunted by the onslaught. And he stuck to it.

On substance, however, Trump’s cavalier attitude toward the electoral process, alongside the attacks he led against public servants and the liberties he has taken on institutions during his first term, should give one pause. Four years of Trumpism have largely contributed to the weakening of one of the greatest democracies in the world. There is a lesson, here, for all the others.

Highly anticipated abroad, as well, this Trump-Biden face-off was the image of the year 2020: frightening for the world, but particularly difficult, at the political level, for the United States. It began with a disastrous impeachment trial, followed by urban violence reflecting the increased polarization of society, in the middle of a pandemic. Two more debates are scheduled between now and Nov. 3. In light of the sad spectacle offered by the first, several American commentators have wondered whether or not to end it there. One is entitled, after all, to wonder what reason and democracy could gain from them.

About Reg Moss 19 Articles
Reg is a writer, teacher and translator with an interest in social issues especially as pertains to education and matters of race, class, gender, immigrant status, etc. He is currently based in Chicago.