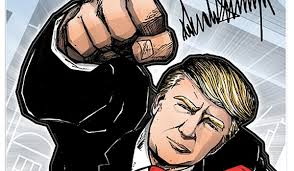 If the president of the United States is infected with a potentially life-threatening virus, it is initially depressing, irritating and dangerous news. It would be no different with any other leading figure in the world. In addition to human compassion, serious illnesses immediately provoke questions of a principled nature: How will the illness affect his ability to exercise office? What political and economic shock can the news trigger? It is no different with Donald Trump than it would be with Vladimir Putin or Angela Merkel.

But first of all, Trump deserves the empathy that even the man’s toughest opponents have to muster if they have retained a spark of humanity. Of course, it is now child’s play to throw malice and ridicule on Trump. His belittling statements about COVID-19, his contemptuous and human-endangering pandemic policy and his ignorance of science can be expressed in a single number: 207,000. The USA ranks at the top in the number of deaths because its president has failed miserably in the fight against the coronavirus.

All of this explains the glee that is now pouring out after the president’s diagnosis. But schadenfreude, malice and humiliation are categories from the Trump camp. Michelle Obama, wife of the former president, coined the instructions for dealing with Trump’s policy of contempt: “When they go low, we go high.” If your opponent hits below the belt, you react with all the more dignity. Respect for more than one million COVID-19 deaths prohibits the infection of the U.S. president and his wife from becoming the object of ridicule and malice.

A New Dimension in the Election Campaign

Beyond the person, however, there is the president and the campaigner Trump. The illness of the 74-year-old man from the highest risk group is, therefore, first and foremost, politically explosive. Trump will see his predictions confirmed in the event of a mild course of the infection, further downplaying the virus and successfully eliminating the consequences of COVID-19 for the U.S. from the campaign. Brazil’s President Jair Bolsonaro, himself recovered from an infection, is currently demonstrating this fact. His approval ratings are high.

If Trump’s illness is more severe, the question arises as to how and whether he can continue to run for office. In an extreme scenario, his days as president could be numbered. Since the beginning of the election campaign in Tulsa, it was certain that Trump’s fixation on major gatherings endangered people. Now the president himself has become a victim of his own hubris: To immerse yourself in crowds without a mask and without distance borders on assault. The very least that can be said is this: Four and a half weeks before the vote, the U.S. is experiencing a turning point in the election campaign. A duel that can hardly become more dramatic enters a previously unknown dimension.