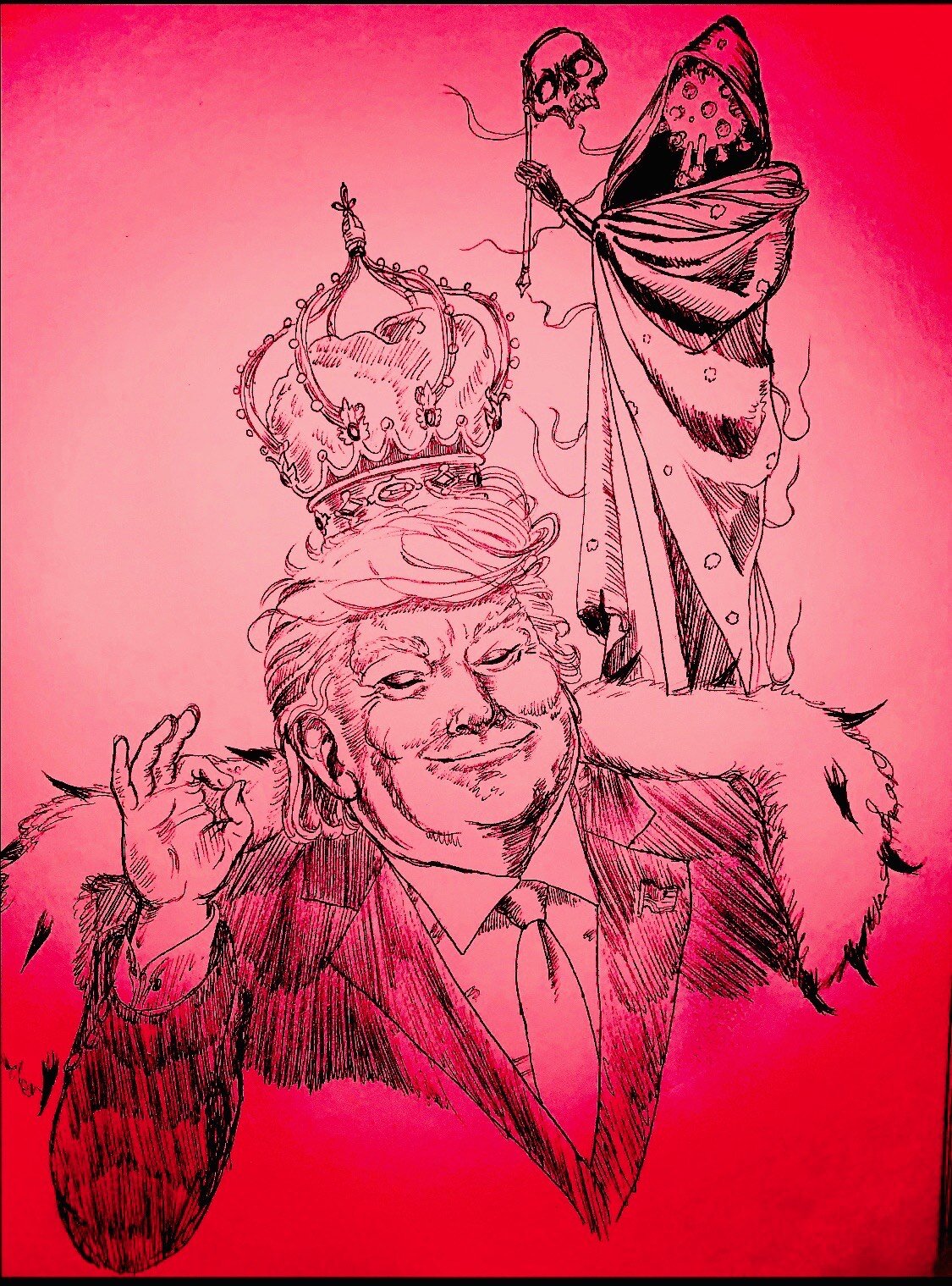 “The Masque of the Red Death” and the White House: Donald Trump seems like a character from a tale by Edgar Allan Poe.

“There were sharp pains, and sudden dizziness … with dissolution.” One has to think of Edgar Allan Poe (1809-1849) in times like these – the U.S. author, whose specialty was the apocalypse of the American dream, who portrayed the excesses of power and influence, the abysses of knowledge and transcendence time and time again in his fiction. The basis of his eerie stories is often the denial of reality, which Poe depicts laconically and callously until heightened to a traumatic extreme.

Poe’s tale “The Masque of the Red Death” (1842), inspired by a cholera epidemic, is especially topical. In it he describes how an upper-class man, the nefarious Prince Prospero, refuses to accept the dangers of an epidemic. At gatherings at his castle, the nobleman spreads pathological optimism, as he drags his guests along with him to perdition. The melodious gong of a gigantic grandfather clock pronounces disaster. The elderly among the guests react to the gong “as if in confused reverie or meditation.”

“Don’t be afraid of COVID. Don’t let it dominate your life,” tweeted President Donald Trump last week, after being discharged from the hospital. While basic medical care is unattainable for millions of U.S. citizens due to the private health care system, Trump, who has now contracted COVID-19, was able to benefit from the best possible intensive care.

Trump has previously ignored all warnings about the high risk of infection; he has unwaveringly presented himself as invulnerable to the virus, thereby trivializing even further the magnitude of the coronavirus pandemic that has now claimed almost 213,000 lives in the United States.

Poe’s Gothic romanticism comes to mind with regard to the irresponsible head of state. Superspreader events in the Rose Garden at the White House, where Trump has repeatedly met with the Republican elite with no social distancing or face coverings, seem like something concocted by Poe. “The pestilence raged most furiously … Prince Prospero entertained his thousand friends at a masked ball of the most unusual magnificence.”

In Poe’s work, the word “framing” means more than just the framing of events; it also means tricking. Trump wants to outwit reason, and pumped up with steroids, he hopes to immunize himself against reality in the fall of 2020. “There are some who would have thought him mad. His followers felt that he was not,” is how Poe ambivalently characterizes Prince Prospero.

Poe was a master at creating an awareness of evil. He repeatedly contrasted the urge for individual self-determination with failure, just like in “The Masque of the Red Death,” where he chooses a sinister castle as the setting for the eccentric aspects of an elite circle.

For the finale, a gaunt person cloaked in a shroud appears, who had come to the party “like a thief in the night” − the Grim Reaper cleans up. The Republican elite is reacting to the chaos in the White House with such panic, it almost seems as if the end is appearing right before their eyes, too. In Poe’s tale, incidentally, the guests at the party rot in the dark.