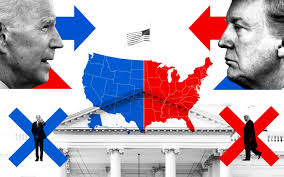 Joe Biden announced that he won the U.S. presidential election, claiming that more than 74 million Americans voted for him. Most Russians are aware that the U.S. president is elected indirectly through the Electoral College because the Founding Fathers were skeptical of direct democracy. American voters cast their ballots for the next president, yet the state electors make the final decision. Each state is entitled to a number of electoral votes equal to its number of senators and representatives in Congress. There are a few lesser-known characteristics of U.S. elections — decentralization, early voting, the role of opinion polls and money, and how voters get to the polls.

Decentralization is a key difference between elections in the United States and Russia. In Russia, the federal law on elections is very detailed and in many ways designed to suppress opposition. In the United States, federal laws only regulate the financing of elections, the limits on donations from individuals and organizations, among others. All procedural issues — such as the registration of candidates, counting votes and voters’ rights — are regulated by state law. For example, in Florida, the Republican authorities decided that mail-in ballots would be counted on a rolling basis. That is how we learned that Donald Trump had won in Florida as early as Nov. 3. In Pennsylvania, the Republican-led legislature refused to follow Florida’s example to spite the Democratic governor.* Thus, it started counting votes on Nov. 3, and the whole world had to wait a few days for the results.

Another obvious difference is early voting. The three-day voting period on constitutional amendments in Russia in July, often conducted in the most unusual polling stations using tree stumps and car trunks as desks, has become a symbol of the country’s sham elections, producing thousands of memes online. In the United States, the media usually report nothing extraordinary about early voting procedures. Different states vote at different times. For example, Louisiana voted between Oct. 16 and Oct. 27, while in Illinois, voting started on Sept. 24 and ended on Nov. 2.

The third difference between election procedures in the U.S. and Russia is the way polling organizations conduct surveys and interpret the results. In Russia, the difference in the number of votes for Vladimir Putin and other candidates is enormous, and when one looks at polls from any polling firm — from the Russian Public Opinion Research Center to the Levada Center — one can easily identify political preferences. In the United States, especially in a few battleground states, the difference in votes for Donald Trump and Joe Biden was statistically insignificant. Many people know that the margin of error in such polls is about 4%. What a lot of people do not know is that the margin of error affects every data point. For example, according to the polling aggregator Real Clear Politics, in battleground states, Biden led Trump by only 2.3%. In all swing states, the difference between Biden and Trump did not exceed 8% (percentage points for both candidates combined), and we could not say accurately which candidate was leading.

Another difference is how voters get to the polls. In Russia, “carousel voting,” a voting method whereby voters are driven in buses to polling stations to cast ballots multiple times, has become a notorious symbol of its rigged elections. In the United States, some Black churches organize voter transit, which might seem odd to an outside observer. Yet, the reason behind it is clear: Unlike in Russia, American voting stations are often located in very remote areas, so it might be difficult for older members of ethnic minorities to get there and vote.

Money is a big issue. In Russia, there is a common perception that money is a decisive factor in politics. In the United States, it is much more complicated. In 2020, Biden’s campaign raised $937 million, while Trump raised $595 million, according to the Center for Responsive Politics. However, in 2016, Hillary Clinton’s campaign raised $563 million, while Trump’s campaign accumulated only $333 million. Thus, in the U.S., you cannot simply “buy” the preferred outcome of an election by raising more money.

The Russians’ perception of elections in the United States is twisted because of state propaganda efforts. Their views do not recognize American democratic practices. In the United States, the rules are decentralized, and procedural issues are delegated to states; early voting, as well as voter transportation, have nothing to do with rigging the election. Besides, money is not the most decisive factor, and election polls require thorough analysis.

*Editor’s note: This statement reflects the opinion of the author and is not necessarily supported by the facts.

About Iana Shchetinskaia 37 Articles
Iana Shchetinskaia studies History with a focus on U.S.-Russian relations. She teaches at a university and a language school in Moscow, Russia. She holds a Master of International Studies degree from North Carolina State University where she studied on a Fulbright scholarship. She is passionate about promoting mutual understanding among countries and communities and considers it a privilege to be a part of WatchingAmerica.