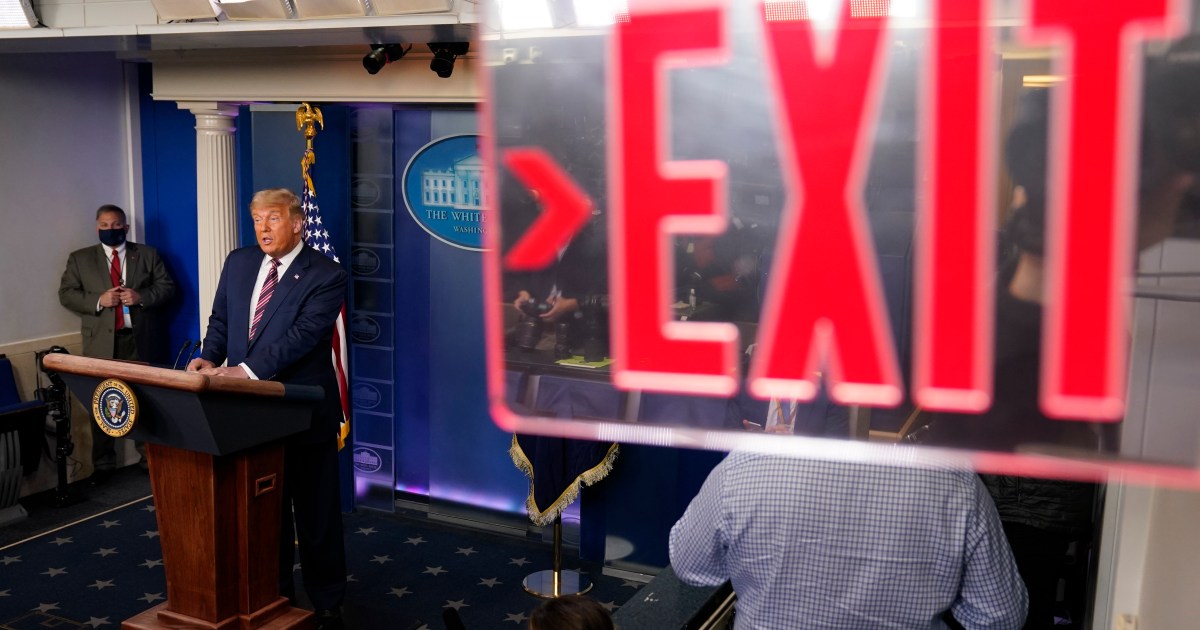 A new chapter in American politics will soon begin on both the domestic and foreign policy fronts after a historic event tested this democracy, which is deeply rooted in a political architecture that depends on the Constitution and upon recognition of customs sustained across more than two centuries. The extreme stubbornness in refusing to recognize defeat and the failure to transfer political power to President-elect Joe Biden reflects the arrogance, personal recklessness and love for power in a desperate individual who does not believe in democracy. It is possible that he has been influenced by several of the world’s authoritarian leaders and “emperors.” What is happening now will deeply affect the reputation of a country claiming to protect democracy, and will harm the democratic way of life in the future.

What happened and is happening now is a historic event. It is the first time that turnout exceeded 67% of eligible voters, and the first time that the winning candidate garnered more than 80 million votes, with the loser receiving 74 million — a difference of only 6 million votes. Despite all the legal attempts to challenge the outcome or recount the votes, the deeply-rooted establishment and a high degree of institutionalization will prevail in the end. What is coming from the Republicans is little more than an an attempt to complicate the situation and grasp at straws. There is a fear that Donald Trump will do something beyond what is reasonable and may act impulsively during the lame duck period ending with the inauguration on Jan. 20, 2021. In any case, the world will breathe a sigh of relief at the departure of this dictator who changed global policy and gave whatever he could to the state of Israel.

The important question is whether the United States will return to lead the free world in an objective, logical and just way, acting with credibility, decency and in a cooperative manner in order to serve humanity. Will it resolve conflicts on the basis of justice and international law?

On the domestic front, Biden will aim to heal social divisions, mend fences and heal the rifts that have overwhelmed society and its structural components, and address the intolerance and racism against Black people, people of color and immigrants. He will also need to manage a fractured partisan relationship, which must be repaired through cooperation and unity among all elements of society. He must restore the country’s unity in addition to fixing employment issues, such as reducing unemployment, improving the standard of living by raising the minimum wage, and pushing to stimulate the economy toward rapid growth.

On the international front, the primary question as far as we are concerned is the central issue of Palestine. Biden believes this issue requires a two-state solution, an end to settlements and reaching a fair solution that does justice to the Palestinian people, who have had to drink a bitter cup from their enemies. However, we must take into account that the U.S. Democratic administration utterly and deeply believes in Israel’s security, stability and superiority. This is a constant fixture in U.S. foreign policy in the Middle East. The new administration will aim to restore balance in international relations and to mend the rift with the European Union and restore that relationship after the devastation that occurred as a result of Trump’s headstrong policies, not to mention the improvement that will occur in the China-U.S. relationship based on interests (specifically commercial interests). International relationships will soon follow a new pattern that differs completely from the prior one.

As for Iran, the previous nuclear deal will be restored only after some improvements are made in line with the interests of countries in the region, noting that there is opposition here to what the previous administration did by insisting upon sanctions against Iran and attempting to make it kneel to Israel’s interests and demands. The previous administration even convinced some that the enemy in the region is Iran, not Israel. And perhaps Trump will behave inappropriately and rashly before he leaves office.

From the beginning, it appears that Trump has demonstrated a lack of legal and constitutional responsibility and refused to recognize political norms in the United States. He has not admitted defeat and refuses to accept the results of the election. Despite having lost more than 33 lawsuits in various federal courts, he still insists — without any legal proof — that the election was stolen from him and that it was tainted by fraud. It is known that the U.S. political system is built on a concept of peaceful change and transfer of power. Trump will remain in his position until Dec. 14, when the Electoral College certifies the results of the election in which Biden won 306 of the Electoral College’s 538 votes.*

What is happening now contravenes established political norms. None of Trump’s efforts will convince anyone, given that Biden received 80 million popular votes — a first in U.S. history. But this small dictator will not be able to withstand the force of the Constitution and its protectors, even if he remains arrogant and continues his effort to overturn the election results.

We believe that Trump is a person who rejects democracy and its effect. This is a first in U.S. political history. What Trump is doing will be a permanent stain on his political legacy.

*Editor’s note: Donald Trump remains president of the United States until Jan. 20, 2021 when Joe Biden is sworn in as the 46th president.