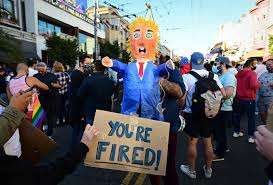 The approach of the incumbent president of the United States is aimed less at polishing his political legacy than undermining the authority of Democratic President-elect Joe Biden.

Since the presidential election on Nov. 3, Donald Trump has steadfastly strived to live up to his caricature image; that of a man consumed by his ego, unable to recognize an indisputable defeat, ready to weaken the institutions he swore to protect when he took office, and all for the sole purpose of allaying his bitterness. Michelle Obama, an expert on the subject, believes that the presidency of the world’s leading power doesn’t change a man, but reveals who he is. In Trump’s case, the image reflected in this mirror is devastating.

The norms he attacked have until now been the pride of the United States: acceptance of an opponent’s victory and the peaceful transfer of power from one party to another. The loser’s concession speech, like the letter in the Resolute Desk in the Oval Office left by the outgoing president for his successor, has long been considered proof of the maturity and strength of a democracy in which, when the time comes, personal ambition gives way to the imperative of the common good.

A departing president can, of course, take symbolic steps designed to consolidate his legacy. But Trump’s approach is aimed less at polishing his political legacy than undermining the authority of the future president of the United States, Democrat Joe Biden.

This scorched earth policy is abhorrent when it deprives the next administration of funds to support a still fragile economy, something the Federal Reserve deplored in an unusual statement. It is disgraceful in the middle of the COVID-19 pandemic, when it very concretely prevents the Democratic team from having the information necessary to prepare for the task, including the distribution of millions of vaccines. It is harmful when it casts doubt on the legitimacy of the next occupant of the White House.

The mounting setbacks in court suffered by Trump’s lawyers, who have been defending his conspiracy theory of massive fraud, should have quickly brought the president and the silent majority of Republican members of Congress to their senses. Unfortunately, this was not the case. Despite the ballot recounts, despite the scrupulous examination of voting conditions, despite the validation of results in state after state, each day that passed only confirmed the indisputable victory of Trump’s opponent.

The alleged election manipulation that would have benefited Biden, but which, strangely enough, also allowed Republicans to win seats in the House of Representatives, is absurd. However, indifferent to the facts, Trump has persisted, dragging with him a critical mass of GOP voters who have descended into blind adulation of their leader.

The certification of Michigan’s results on Monday, Nov. 23, despite the president’s pathetic delaying tactics, forced him to officially initiate the transition, without yet acknowledging his defeat.

The venture that Trump embarked on was bound to fail. American democracy will return to its usual course on Jan. 20, 2021, when Biden takes the oath under the dome of Congress.

But let us hope that the judgment of history will be severe with this aspiring apprentice, because the man who promised to make America great has brought the country down with his behavior.