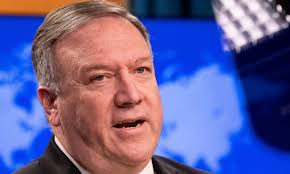 Mike Pompeo, a complete liar, has managed to make a fool of himself again. America’s worst secretary of state in history issued a “statement” on Dec. 8 making groundless accusations about China’s enactment and implementation of the Hong Kong national security law according to its provisions, and absurdly announced that the U.S. would impose sanctions on the vice-chairman of the Standing Committee of the People’s Republic of China.

U.S. politicians like Pompeo are attempting to interfere in China’s internal affairs and engaging in hysterical political bullying under the pretext of addressing Hong Kong-related issues. Some 1.4 billion Chinese people, including our compatriots in Hong Kong, will never accept such manic and evil conduct by the U.S.! In response, the Ministry of Foreign Affairs, the Hong Kong and Macau Affairs Office of the State Council, the Liaison Office of the Central People’s Government in Hong Kong and the Hong Kong Special Administrative Region government have condemned the remarks and expressed strong indignation.

The public will decide what is right and wrong with this. No country in the world would turn a blind eye to behavior or activities that endanger their national security. Nor would any country allow people who split a nation, destabilize its political system or collude with external forces to hold public office. The formulation of the Hong Kong national security law is in line with international practice and effectively closes legal loopholes in the maintenance of national security in Hong Kong. Legally removing those “pan-Dem” people who are damaging and disrupting Hong Kong’s affairs from the Legislative Council has maintained Hong Kong’s constitutional order.

The formulation and implementation of Hong Kong’s national security law has restored stability to Hong Kong society and the Legislative Council is operating more smoothly and efficiently. It has received the support of the mainstream public in Hong Kong. The U.S. has numerous national security laws of its own, and has also laid down strict rules for its own political representatives. But Pompeo and his kind have repeatedly criticized, dictated and grossly interfered in Hong Kong’s affairs. Such naked double standards and “robber baron” logic have fully exposed the sinister intentions of some U.S. politicians to disrupt Hong Kong and undermine the policy of “One Country, Two Systems.”

Certain U.S. politicians have been desperately playing the “Hong Kong card” for a while in order to contain China’s development. They are completely unscrupulous, deliberately misrepresenting issues and telling one lie after another. In order to undermine “One Country, Two Systems” and to distort Hong Kong’s constitutional status, they have concocted domestic laws, such as the so-called “Hong Kong Autonomy Act,” in a vain attempt to exercise long-arm jurisdiction over Hong Kong, to disrupt the social order in Hong Kong, cultivate reactionary forces in Hong Kong, lend support to the high-profile leaders of the unrest in Hong Kong and give visibility to a black-clad mob. Since the National People’s Congress started the process for national security legislation in Hong Kong, they have repeatedly used sanctions to intimidate central government and Special Administrative Region officials, even resorting to the despicable tactic of infringing on the privacy of officials. All this impetuous and evil behavior has shocked the international community.

Intimidation and threats cannot frighten the Chinese people. Each time the U.S. imposes sanctions, it only strengthens the resolve of the Chinese people to safeguard national security, and will only allow people from all walks of life in Hong Kong see the ugly face of American hegemony more clearly. The Chinese government’s determination and confidence in the steadfast implementation of the “One Country, Two Systems” policy will not be shaken in the slightest, nor can the historical process of the great rejuvenation of the Chinese nation be stopped.

“No mountain can stop the river flowing to the sea.”* No matter what U.S. politicians do, no matter how much noise they make, it’s only the fantasy of people who appear outwardly strong but are inwardly weak. It doesn’t change one bit the timeless fact that Hong Kong will always be China’s Hong Kong. The nefarious Pompeo and his ilk are already the subject of scorn, and the sanctions have been staged as a mad last stand so they can make their mark. It is destined to be a waste of time, a pointless exercise, and will merely be ridiculed by the whole world!