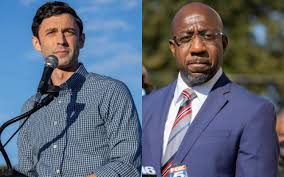 Georgia has been one of the most interesting states to follow during the 2020 election year. A new swing state, it allowed for Joe Biden’s victory, due to strong mobilization efforts and voter turnout

As much as we long to turn the page on this painful year (2020) and as much as the Democrats hope that the voting trends observed during the presidential election will carry over to the vote on Jan. 5, two seats in the Senate are up for grabs and could be the deciding factor for the next two years. Will President Joe Biden preside over a Senate with a Republican or Democrat majority?

Just a few weeks ago, I would have predicted two Republican victories but things are changing. For my last op-ed for the year, I figured I would present the state of things just a few days before the vote.

For the time being, the polls indicate a tight race. We can sometimes question pollsters but they were correct in Georgia in 2020. In the current case, the Democrat Raphael Warnock is ahead of the Republican Kelly Loeffler by a small percentage, while in the other race, the Republican David Perdue is pulling ahead of his Democrat rival Jon Ossoff.

Despite numbers that do not allow for us to draw conclusions nor firmly step forward on predicament-plagued terrain, some indicators seem to favor the Democrats.

Another piece of good news for Ossof and Warnok can be attributed to the fact that young voters have once again mobilized just as Black voters did for the presidential election. These electoral bases have clearly favored the Democrats.

A little worried, but far from being beaten, the Republicans are counting on the president’s visit on Jan. 4 to galvanize the troops. We already know that Republican voters prefer to vote in person on election day, but it remains to be seen whether the defeated president’s charm can still work its magic. He will undoubtedly play on the fears of a socialist program to stimulate his voters, but it is questionable whether they will respond overwhelmingly to the call.

We’ll have an answer soon, and another Democratic win would make Georgia the new darling of pollsters, commentators and analysts. Since the projection that evolving demographics would impact politics, Democratic victories in Arizona and Georgia have confirmed predictions.

I will use this last publication to wish you a great 2021. Just like many of you, I imagine, I wish us a return to a more normal life next year, one that will be possible thanks to the development of new treatments, a vaccine and our solidarity.

I hope to see you all again in large numbers and I will continue to respond to your messages each time that I have the chance.