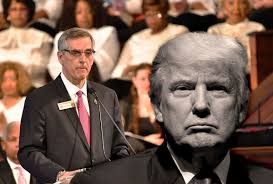 There are high stakes debates about Christianity, the Constitution, political ethics, democracy and criminal justice, perhaps a first in the history of American democracy.

The New Testament asks us in Mark 8:36: “What good is it for someone to gain the whole world, yet forfeit their soul?”

According to several Republican senators, Donald Trump may remain president, and one of these corrupt guys could take Trump’s place after him.

Such is the unprincipled view of the Trumpist faction within the Republican Party:

Democracy is fine as long as it’s a mechanism to ensure we stay in power;

Screw the rules if we cannot maintain power; and

Power depends on our will and our leader’s will.

These people are Trump’s lap dogs who seek to support his political interests.

We have seen their Mafia-like behavior.

If I were the editor of this newspaper, I would print their pictures across the entire page under this headline: “Never Forget These Faces. “

Did these GOP representatives and senators choose loyalty to their Constitution or to Trump in this dilemma?

What if Trump’s allies control the House, Senate and Supreme Court, and void Biden’s victory?

I don’t know what would happen then.

Most of the 81.2 million Americans who voted for Biden would take to the streets – I would join them – and would probably attack the White House, the Capitol and the Supreme Court.

Trump would call up the U.S. Army.

The National Guard, controlled by state governors, would split on this issue, and we would be dragged into civil war.

These people are playing with fire.

(The above lines were written yesterday before the Senate’s vote to certify Biden’s election).

They are ready to lick Trump’s boots until the very end.

I hope that every news organization and every citizen refers to senators like Josh Hawley, Ted Cruz and Ron Johnson and their associates as “coup plotters” from now on.

Make them carry the label “coup plotter” from here forward.

If you see them on the street or in a restaurant, say politely to them, “You were one of the coup plotters, weren’t you? Shame on you.”

These words were written by Thomas L. Friedman, author of seven bestselling books and a three-time Pulitzer Prize winner.

His column was published in yesterday’s New York Times.

How Does the Republic Work?

The New York Times has an independent editorial board, which is separate from its news department.

Equipped with expertise, research, debate and longstanding values, the editorial department publishes editorials on important subjects linked to the newspaper.

Yesterday, the editorial board wrote that Trump’s request for, and threats to, secure more votes in the Georgia run-off election should be punished.

The editors charged the Republican Party with generating an “existential crisis: a political party that is no longer committed to representative democracy.”

This editorial states that “more than 150 Republican lawmakers have signed on to reject the votes of tens of millions of Americans.”

“[T]his is all political theater,” The New York Times said.

Trump’s resistance to leaving the White House has been described as a problem of the regime.

“That’s a big problem, because a republic works only when the losers accept the results, and the legitimacy of their opponents,” the editorial concludes.

In any landscape, the word “coup,” a reference to something which poisons human rights, democracy, modernity, civilization and all moral values, should be destroyed.