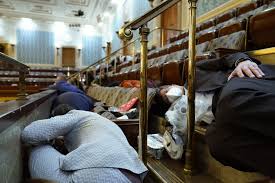 There is a name for what is currently going on in the United States. It’s called a coup d’état. A putsch fomented by a desperate man, beaten by the sovereign people at the ballot box, disavowed by the justice system, who chose to set the country on fire rather than relinquish power.

We are way past the debate that only a few hours ago was about whether Donald Trump had been the worst president in history. All this has become so trivial.

Last night, Trump became a seditious president, and should there be but one death, a criminal one. He is the conspiracy against America. He will have to answer for it before history and possibly in court. Democracies cannot continue to let themselves be trampled over this way.

The attack on the Capitol that took place last night is an irreparable, an inconceivable act. Symbolically, it amounts to a declaration of war. And this declaration of war, which confirms the worst fears expressed in the past few months, is signed by Trump, who only yesterday called on his followers to march on the most sacred institution of the world’s greatest democracy.

It would be a mistake to ascribe this to recklessness, when in fact it was done with full awareness. And his hypocritical appeals to calm issued after it was too late cannot fool anyone: Trump is a madman. He is a threat to the free world; it is impossible to deny it now that he has crossed the Rubicon. The worst thing is that he managed to obtain by force what he couldn’t get through the ballot box since the validation of Joe Biden’s victory was interrupted.

The fire set yesterday by the dictator apprentice will have repercussions in the entire country. Blazes will erupt everywhere. America this morning is on the brink of collapse … of losing its collective conscience … of civil war, and it’s hard to believe we’re writing those words.