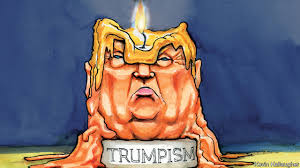 The man himself, now defeated by his obstinate raving and the resilience of democratic institutions, will shortly be leaving the spotlight, but the unrest he has embodied and established will live on.

It’s surprising how difficult it is to define Donald Trump’s point of view given how he intruded onto the political scene. Everything has been said, without ever embracing how his character is open to many interpretations. Sociopath, narcissist, cynical reactionary, compulsive liar, born provocateur, criminal manipulator, supporter of worldwide injustice, proto-Mussolini fascist, and a thousand other definitions that are simultaneously improbable and true. He is the “perfect storm,” especially for a democratic system capable of taking authoritarian figures who personify the common evil under its wing. With the exception of 74 million citizens who put their faith in his world vision, or the vast majority of the Republican Party who supported him, and even, probably, millions more people outside the U.S. who perceive him as a tycoon-cum-hero in the fight of the people against the elite, he symbolizes the confrontation between victims of capital domination and those who dominate them in every respect—a perversion of the truth filtered by social media and taken to the extreme.

Perhaps the best reconciliation of the Trump phenomenon and its legacy in political vocabulary can’t be found in the person himself, but in a current, a thread that runs through the whole political system, in particular, the imperfect democratic system, a neurotic fascist tendency that is always latent in democracies and which may emerge under favorable conditions, or remain hidden in daily social interaction. It is a current that highlights a nostalgic pro-coup military beyond the proliferation of extreme right parties, for example; the arbitrary conduct of certain police forces, the acid wave of hatred for the other from within a civilized society, factors and ideas that, in turn, make it possible to have a Trumpist figure emerge from within the political spectrum. “We’re going to walk down, and I’ll be there with you,” the man who was still president proclaimed loudly on Jan 6., directing his fanatic supporters to stop the certification of Biden’s win in the most democratic election in U.S. history. And there was violence and death.

The man himself, now defeated by his obstinate raving and the resilience of democratic institutions, will shortly leave the spotlight, but the unrest he has embodied and established will live on. There are millions who believe in a Trumpist salvation, without relying on the Republican Party that is equally responsible for the criminal behavior which upset the constitutional order, in a world that continues to be vexed by inequality, an absence of hope among society, and the legitimate anger of people who have been excluded and marginalized. Trumpism is not just the political movement of a fanatic multimillionaire and expert on uninhibited communication through social media. It is, before anything else, the fruit of a latent world view, ready to be manipulated and exalted, that holds all the frustrations harbored in diseased democracies. The clown disappears, but his footprints remain.