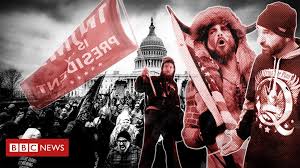 In the best stage plays, there are always three dramatic elements that are part of what the author intends to say: tragedy, comedy and satire. In the mise-en-scène directed and organized by Trump supporters on Jan. 6, each of these theatrical elements were shaped on the message of the movement’s playwright, Donald Trump. Not since the United States was founded has the world seen such a symbolic assault on the democratic system of the greatest Western power, and seen it live on television. Some would say the 9/11 attacks were the same kind of assault, but last week’s events were perpetrated by fellow American citizens, while the planes that hit New York and impacted the world in 2001 were provoked by foreign extremists.

But just as the premiere of such an event is stimulating, it contains symbolic elements that enhance the theatrics so spectators remember what they have seen.

The hordes of Trump supporters in the Capitol evoked a great deal of symbolism, the display of the Confederate flag, for example. Those who carried it intended an allusion to the slave states that existed in the South and to instill a sense of violence and racism, something the Ku Klux Klan displays every time they remind the world of the abominable ideology of white supremacists. Not even during the American Civil War did people walk into a building as if they owned the place carrying a commemorative symbol of such ignominy. Judging from the expression of the person who carried the flag, one can surmise that he knew the results of the election in Georgia. An African American man was elected to the U.S. Senate representing Georgia and the South for the first time. Tragedy or satire?

Another image that will go down in history from the hours that threatened American institutions is that of numerous radicals carrying police zip ties eagerly seeking someone to handcuff. You can infer the premeditated intention of some of these assailants seeking to stop members of Congress. I seriously doubt they wanted to “get their hands on” Trump’s own vice president, Mike Pence, who constitutionally presides over the Senate and must certify the election of Joe Biden and Kamala Harris. But this where the comedy in this anti-democratic production comes in. In an effort to hold bureaucrats hostage, insurrectionists may have confused Trump’s second-hand man with the enemy.

The primitive performance at this thankless moment in history had one final figurative and comical element. The insurrectionists seemed more concerned with taking selfies than with making a statement or sending a careful or detailed message that might have been analyzed later to discern any ulterior motives.

They had a very simplistic libretto — like the meager vocabulary used by the work’s own creator. From what we could see, they preferred to have souvenirs of their grotesque visit to the Capitol over building a revolution. Trump’s followers lost, even at that.

In summary, the real tragedy from my perspective is this: An 11-year-old boy will see these images, and in imagining his future as a citizen, he may think that this is how the new world operates. Maybe that’s what the author of this play intended.