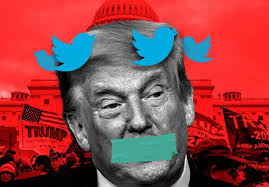 German Chancellor Angela Merkel criticized the move, saying, “The right to freedom of opinion is of fundamental importance.” A spokesman for Chancellor Merkel added that “[t]his fundamental right can be intervened in, but according to the law and within the framework defined by legislators — not according to a decision by the management of social media platforms.”

While I agree with the former, I must take issue with the latter. Using the law to interfere with speech is censorship and amounts to a violation of freedom of speech and expression. At any rate, the First Amendment to the United States Constitution prohibits the enactment of any law that would limit freedom of expression, to protect freedom.*

The Sankei News has recently called on social media companies such as Twitter to act autonomously “editors” to eradicate content with malicious intent on their sites, such as the incitement of terrorism, the buying and selling of illegal drugs and child pornography, etc. The “risk of further incitement of violence,” the reason given for suspending Trump’s account, is an extension of this response, and the shortsighted criticism that private companies should not be able to suspend accounts is irrelevant.

On the other hand, if social media companies, which have become giants and wield enormous influence, become guided by selfish and political motives, they may come to possess uncontrollable power. It is essential that they always hold themselves open to criticism. Their guiding principles should always be transparent, and when significant decisions are made, we should be able to easily identify the people in charge who can provide a clear explanation.

I suspect the vague distrust of social media is, in part, due to the fact that their management consists of faceless entities.

Twitter CEO Jack Dorsey said on Jan. 14 that the situation was “forcing us to focus all of our actions on public safety.” At the same time, he expressed concern that “[h]aving to take these actions fragment the public conversation … [and] sets a precedent I feel is dangerous,” and that in the long term, such actions “will be destructive to the noble purpose and ideals of the open internet.”

There is no doubt that had these kind of comments expressing genuine hesitation been presented when Twitter suspended Trump’s account, the reaction would have been quite different.

Ultimately, Trump was forced to withdraw from social media, despite utilizing it more than anyone. Moving forward, it will be necessary for society as a whole to consider what kind of relationship it will have with this fledgling industry.

*Editor’s note: The First Amendment provides: “Congress shall make no law respecting an establishment of religion, or prohibiting the free exercise thereof; or abridging the freedom of speech, or of the press; or the right of the people peaceably to assemble, and to petition the Government for a redress of grievances.”