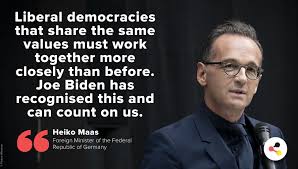 The new U.S. president will behave more responsibly in foreign affairs than his tumultuous predecessor. But Joe Biden will also demand more from his allies. What does Germany have to offer the new American administration besides empty words?

“America is back,” declared President Joe Biden. “Diplomacy is back.” After which he then, in his first speech on foreign policy, unilaterally announced that the U.S. would no longer sell arms to the Saudis to continue their proxy war against Iran in Yemen. Those who are glad to have an America that will play a role in global politics once again, as Biden announced, must know that this America will not be an easy partner.

Those who listened closely as Biden listed the most important friends of the United States noticed that the European Union was missing, as was Israel. And that, among the most important challenges facing his administration, Iran and Islamic terrorism were both missing. Since Biden’s words, unlike those of his erratic predecessor, can be taken seriously, they are important signals. The Europeans will probably have to take care of their own affairs.

Throwing a bone to the Germans — fourth among the most important allies of the U.S., behind Canada, Mexico and Great Britain — Biden announced that he would initially stop the troop withdrawal from Germany. Good. Their presence underscores the willingness of the U.S. to support Western European militarily in the event of a Russian attack. Biden will demand that the favor be returned.

Indeed, Biden, unlike his predecessor, had a clear message for Russia. He called China a “global rival,”* but referred to Russia as an adversary of democracy. Biden has not forgotten that the EU, responding to German demands, concluded an investment agreement with China immediately after his election without consulting Biden, nor the fact that Germany continues building the Nord Stream 2 pipeline, which establishes European dependence on Russian gas.

Biden’s reference to the Marshall Plan, which saved Western Europe after Germany instigated World War II, must be understood as an answer to German Minister of Foreign Affairs Heiko Maas who, in a momentary delusion of grandeur after the storming of the Capitol, had offered the U.S. a joint “Marshall Plan for Democracy.” Maas, who two years ago had made a big to-do when christening an anti-Trump “Alliance for Multilateralism,” will have to ask himself what the German government will bring to the “Summit for Democracy” that Biden wants to convene as an alternative event.

Biden is right. Diplomacy is back. That means giving and taking. What does Germany have to offer the new U.S. administration besides empty words?

*Editor’s Note: The quote, though accurately translated, could not be independently verified.