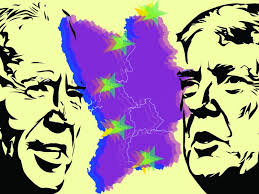 Joe Biden’s administration is demanding that Belgrade recognize Kosovo’s independence. The U.S. is anxious for this to occur so that Kosovo, and later Serbia, can join NATO. While such a turn of events might seem improbable at the moment, it might soon become a reality. After all, the Americans have become very bold in the Balkans, striving to achieve their goals in the shortest time possible.

Throughout the 20th century, the United States initiated political coups and committed war crimes on all continents with the exception of Australia and Antarctica. But for some reason, the Balkans are the area where Americans lose all sense of right and wrong and commit atrocities that are avoided even in Africa.

During the Bosnian war, the U.S. brought in NATO troops for the first time ever and fired missiles containing depleted uranium for the first time in Europe. Before that, only Saddam Hussein had received this treatment from the Americans. Yugoslavia was shelled with these missiles in 1999. Furthermore, this independent, sovereign country, which was recognized by the U.N., was torn apart. Kosovo was split off and the U.S. built Camp Bondsteel there (the second largest American military base in Europe).

A recent illustration of this insolent behavior was the reception at the White House, where the Serbian president was seated across from Donald Trump, much like a naughty schoolboy. It is probable that this exact image is what the Americans were going for; after all, the American media have painted the Serbians as murderers for the longest time.

When it comes to the Balkans, the United States ignores not only international law, but also diplomatic etiquette and basic decency. In fact, at this very moment, James Hagengruber, information officer at the American embassy in Belgrade, stated that the main requirement for Serbia’s entrance into the European Union is its recognition of Kosovo’s independence.

The U.S. presents its own demands as coming from the EU, thus breaking the chain of command and showing disregard for its allies. Furthermore, this disrespect is shown by some small fry, an information officer who ignores the fact that the EU does not actually recognize Kosovo’s independence. (Five members of the EU — Greece, Spain, Cyprus, Romania and Slovakia — still consider Kosovo to be part of Serbia.)

Hagengruber’s announcement occurred shortly after the sentencing of Momčilo Perišić, whose story perfectly illustrates America’s impudent behavior in the Balkans.

Perišić was the Yugoslavian chief of staff for a six-year period, during which the Bosnian war occurred. He was sentenced to 27 years in prison by the International Criminal Tribunal for the former Yugoslavia for crimes so horrendous that one gets nauseated hearing about them. However, in 2013 ICTY’s court of appeals acquitted him of all charges, citing a “juridical error.” In a recent turn of events, though, Perišić has been sentenced to three years in prison by a Serbian court. This time he has been accused of espionage for the U.S., a charge that had previously been unproven. This is not surprising: After all, the Hague court’s love for Serbs and its obedience to the West have long been legend. Still, such an audacious attempt by the U.S. to save one of its spies is bold even by American standards.

On the other hand, former Kosovan President Hashim Thaçi is on trial in another one of the Hague’s courts right now. He was one of the main figures behind Kosovo’s independence and the U.S.’ biggest political stake in Pristina. But when he decided to rebel against Washington, D.C., and went against American demands of “mutual concessions” from Belgrade and Pristina, it was suddenly discovered that Thaçi was suspected of war crimes, committed during the time when he was a most obedient American ally.

Why such audacity persists in the Balkans is a mystery. Maybe there’s something in the air that causes even the least important local people to dream of enormous national empires that would take up a large part of the peninsula.

In Ukraine and other banana republics it is the norm for the American ambassador to dictate his will to the head of an independent country. Unfortunately, this seems to be the case in the Balkans as well. For instance, take the case of Bulgaria, which was forced to give up on the “southern stream,” a pipeline project that would have benefited the country immensely!

Furthermore, after 2014 it became the norm for every Balkan country to basically be assaulted by a team of American diplomats, members of Congress and senators demanding a reduction of Russian influence in Balkan affairs.

American journalists and experts also have a special relationship with the former Yugoslavian countries. It has been proven multiple times that even critics of American international policy who recognize crimes that the CIA and Pentagon have perpetrated in other countries stop listening when the conversation turns to the Balkans. This is an infinite loop: No facts or evidence have been able to break through the American mantra, “We were in the right there; let’s leave it at that.”

“There” is any country in the region at any moment in history. Americans peremptorily claim that they were in the right in Bosnia and Serbia, in Montenegro (which was forced into NATO, the people’s will broken) and in Macedonia (where the same process was followed by such a dangerous crisis that the government froze, teetering on the brink of international conflict).

Of course, in Kosovo, the Pentagon and the State Department were especially in the right, and all who doubted that were branded supporters of Slobodan Milošević’s bloody regime. All the U.S. has left to do is make its version of Yugoslavian history the official one and legalize the results of all American crimes, coups and intrigues in the Balkans.

The U.S. has achieved almost all its goals in the Balkans. Russian influence has been decreased significantly and almost all the countries in the region have been forced into NATO in the shortest possible time frame.

Only Bosnia, Serbia and Kosovo (with Camp Bondsteel) remain outside NATO and its military infrastructure. In Bosnia, the Dayton Agreement has not been broken yet, although there have been attempts. And in Serbia the people still remember being bombed by NATO.

Another war will probably be fought for Bosnia to join NATO. But for Serbia and Kosovo, the only requirement for entrance is mutual recognition (members of NATO who have their own separatist issues and refuse to recognize Kosovo will not accept anything less). Therefore, Americans are working hard to achieve this mutual recognition. They are baiting Serbia with the prospect of joining the EU, even though the U.S. has no authority to speak on behalf of the EU.

Several days before Hagengruber’s statement, Biden himself addressed the Serbian government and encouraged it to recognize the sovereignty of Albanians in Pristina. Biden also hinted that the U.S. will be paying close attention to Serbia and its geopolitical decisions. There is a consensus among Democrats and Republicans that all the Balkan countries have to join NATO, leaving no “white spaces” on the map. Trump was a little less invested in the Balkans, while Biden, as the heir to Bill Clinton’s and Madeleine Albright’s international policy, is more invested. Therefore, the process will be accelerated and the pressure on Belgrade will increase.

For the moment, Serbian President Aleksandar Vučić and the party in control of the government have been able to stand up to the U.S. The wound left by Kosovo is deep and painful, making it impossible to depart from national principles at the moment. However, how long this will last is uncertain.