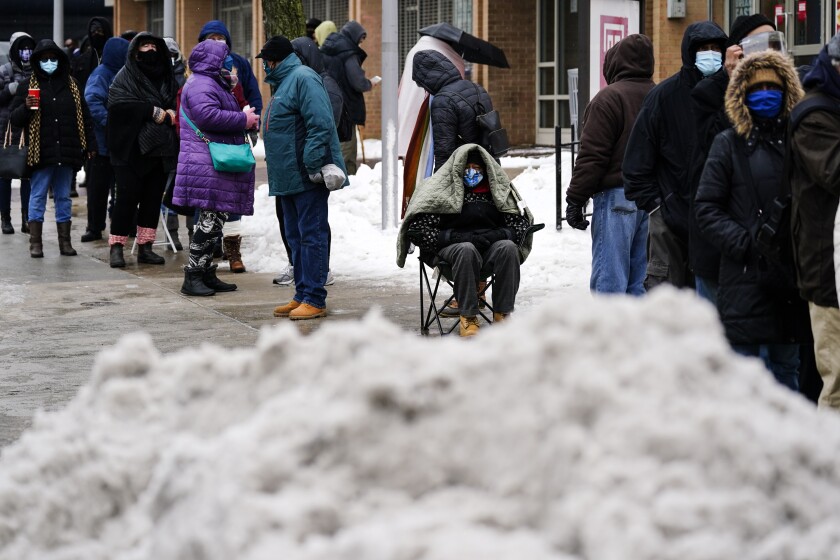 Half a million! A number that leaves the entire world in disbelief. According to the latest data released by Johns Hopkins University, as of Feb. 23, the number of deaths in the U.S. related to COVID-19 exceeded 500,000, and the number of confirmed cases reached more than 28 million.

While American citizens must endure the current pandemic, a rare winter storm has swept through many southern states, crippling infrastructure and leaving tens of millions without water or power. Local government efforts at disaster relief are proving to be ineffective, lawmakers are sneaking away to avoid responsibility, power companies are using the opportunity to reel in profits, and some businesses are inflating prices. Superimposed on the pandemic have been both man-made and natural disasters while American citizens are left struggling.

When faced with the test to contain COVID-19 or manage disaster relief, the U.S. government’s response has been full of mistakes and widely criticized. The United States of America, always grading other countries’ performance when it comes to protecting human rights, has clearly failed its own test.

The right to life is the most basic of human rights. The U.S. has the most scientific and technological advancements and is the most powerful country in the world, yet it is the epicenter of the pandemic, and has become the country with the most confirmed cases and highest death toll. It can no longer sustain the facade of being the world’s “guardian of human rights.” Time and time again the facts have proven true: It doesn’t matter how much funding the U.S. pours into developing a vaccine, how advanced its medical technology is or how perfect its medical system is; all of these resources will never be effectively employed if the U.S. chooses not to prioritize the welfare of its citizens.

People won’t forget the U.S. officials who, in the midst of a pandemic, chose to ignore the needs of citizens for political gain, who despised sound science, deceived citizens, shifted blame, constantly instigated ideological conflict, exacerbated social governance failures and interfered with international efforts to contain the pandemic.

People won’t forget the summer of 2020, when COVID-19 had yet to be substantially contained and some officials chose not to listen to medical experts, but instead forcibly restarted the economy, which quickly led to an increase in cases. For these politicians, restarting the economy was more important than making efforts to contain the pandemic because political achievement mattered more than people’s lives.

People won’t forget the fact that during the pandemic, the mortality rate in low income neighborhoods that were either predominantly Black or Latino was generally much higher than in relatively wealthy, predominantly white neighborhoods. George Floyd’s death sparked outrage across the entire U.S.; citizens took to the streets protesting across the entire nation. The scars of racism, class antagonism and wealth inequality that had been left on American society became all the more apparent.

The inaction and misconduct of some lawmakers when it came to containing COVID-19 disrupted international efforts to end the pandemic and have cost American citizens a hefty price. What’s more, the bitter cold that southern states faced has once again left citizens bitterly disappointed.

The cold wave that hit many states, including Texas, crippled infrastructure, caused power outages and left people without water. These states face food shortages while the disaster response from local governments remains slow and politicians leave the country to “escape” the crisis. Electric companies have seized the opportunity to take advantage of citizens, who are now receiving hefty bills. Extreme weather conditions have also led to massive delays in the supply of vaccines for COVID-19, as well as a delay in vaccinations in Texas. You can imagine what a cold winter this is for the people of Texas.

From the pandemic to the winter storm crisis, it has been one test after another, each exposing how broken the United States’ system is and serving as evidence of an institution in disarray, one that is experiencing economic imbalance and crises that include social upheaval. It has become apparent that the “human rights” the U.S. proclaims to protect is nothing more than a lie. Government officials can scream as loud as they want about human rights and “universal values,” but if they don’t understand something as basic as the sacred nature of human life, are unwilling to acknowledge that life is more important than anything else, and refuse to accept that the right to life and health are the most basic human rights, it will be difficult to gain the trust and support of the people, let alone continue to promote economic development and social progress.

Half a million lives lost and hearts frozen over by a brutal winter. The ever increasing death toll is a cause for concern. Only by prioritizing the welfare of citizens and implementing effective procedures is it possible to turn this pandemic around, to bid winter farewell and usher in spring.