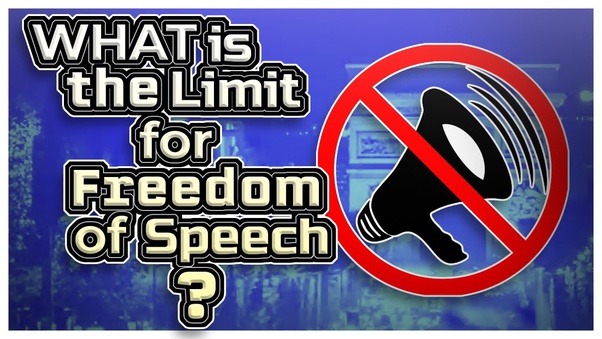 The meaning of the English word “argument” includes not only its most direct Bulgarian translation of “thesis,” but also definitions such as “dispute” and “altercation.” Naturally firmly held opinions and argumentative debate between interlocutors could easily morph into an altercation. And a verbal altercation, an ever hotter war of words, could eventually move beyond rhetoric.

Should there be limitations on freedom of speech? Aggression within a debate of ideas and aesthetics, aggression within politics, within speech, scathing verbal attacks and biting irony of the most venomous kind are permitted. A politician has the right to convince us that he is right and his opponent is wrong. The artist may scandalize, shock and infuriate. As long as a certain line is not crossed. This line lies within the realm of ethics; it is not a legal line. It delineates a border outside of which lie ugly personal attacks devoid of factual, verifiable assertions. An artist, a person of esthetic principles, should not allow themselves to denigrate others. This is to suggest censorship; it is a matter of the personal hygiene of the soul.

Ethics and aesthetics are two sides of the same coin. There must be some universal, basic notions of beauty, of goodness; laws of coexistence within the arts, within society. But beyond this people should have a sense of taste, a feel for beauty and goodness. One should perceive that some things – a comment or action affecting others – are vicious, and therefore impermissible.

Politicians, when compared to artists fighting aesthetic or generational wars, are more likely to cross such a line and enter the realm of the morally reprehensible. This is because politicians often lack a sense of taste, an understanding of beauty and ugliness. Politicians have no reservations about the use of appalling personal attacks, “ad hominem” arguments outside the bounds of truth. Totalitarian leaders, dictators – they lock their opponents in jail by employing fabricated charges of corruption, theft, amorality, treason. They will often discredit, then murder. This is the logical conclusion of the “ad hominem” attack.

Personal insults, racial or sexual slurs – to say that a woman is successful in her career because she is a whore, to say that a Roma person will always be dirty and uneducated, to say that a refugee is innately a lowlife and a criminal, to victim-blame the sexually assaulted (because they are female), to insult the weak from a position of power, to use epithets against those with a different sexuality or gender or race, to insult a minority from the safety of the majority – that is morally and aesthetically shameful. But such ugliness, such vulgarity, cannot be forbidden by law. It is a matter of taste and personal hygiene. There are many legal yet immoral actions.

Another type of repulsiveness that is inexcusable in a modern debate and within civilized behavior (even if it is less obvious and more insidious) is the partially accurate citation. An example: I say, “A person is allowed to use violence – but only in self-defense or in the defense of another from violence,” and the quote stops at the hyphen. Then I have been quoted, but my intended meaning is utterly distorted. This is something that is often used by politicians.

Of course, in a new era of “alternative facts” citations are not just distorted. They could be replaced by outright lies. People convince themselves that black is white, that evil is good. When we talk about the distortion of facts within politics, we should realize that this could lead to social unrest and civil war. If we have the power to convince the people that an election victory was insolently stolen, it is predictable that we will witness an armed uprising against such imaginary fraud.

In his arrogance, Donald Trump engaged in disturbing speech and personal attacks, distorted the words and positions of his opponents and spread lies claiming they were truth. Mutual attacks from radical nationalists in Bulgaria and Macedonia (politicians, not regular people) use the same tactics. Nationalist-populist politicians purposefully use aggressive rhetoric as a means of winning elections.

The language of internet trolls (some paid, others dissatisfied and bitter – freed from all propriety by the darkness of anonymity) adopts character assassination, ad hominem arguments and the distortions of the words of others. Or outright lies and conspiracy theories.

The line of decency in politics is constantly trampled upon in social media. The issue of censorship is ever more relevant. Should we have censorship?

There are just a few private companies that enjoy a monopoly on information – that is a problem. They dominate the entire social media sphere and thus the entire flow of information in the world. This is concerning, as both censorship and the manipulation of information could become absolute.

Is censorship ever acceptable? Without freedom of speech we will regress toward a world of tyranny and informational darkness.

Yet there must be some limits to freedom of speech. Speech can be a dangerous weapon, especially when heard by millions. A call to violence focused on individuals, political opponents or minorities cannot be tolerated. Exhortations for war or violence are impermissible.

We cannot educate and force someone to comprehend that verbal, psychological, or political violence toward others constitutes ugly, impermissible actions if they do not wish to understand it. Morality and aesthetics cannot be legislated. Many examples of immorality, of the grotesque, are perfectly legal.

We do need some laws, some legal definitions of the permissible. Otherwise democracy becomes anarchy: Social decay would follow, leading to a war of every man for himself. And then – tyranny: unlimited power held by a strongman or the most cunningly corrupt.

The “legal” prosecution supported by charges of immorality is often a thinly veiled attempt at harassment and coercion and censorship in lawless, corrupt countries – in dictatorships. But democracies have laws. Democracies require legal limits, agreed upon by all, that are obeyed. The state cannot enforce morality. It is a matter of taste. But there must be laws for those without taste.

The state is neither an artistic genius nor a holy man – it cannot teach. Power stems from the people and serves the people. The legislature creates laws that must be obeyed even by those who have no sense of morals, of the aesthetically permissible. Laws must be obeyed for democracy to exist.

A monopoly is just as much a danger to democracy as lawlessness and corruption. Political monopolies, meaning dictatorships (North Korea, Russia, China, Saudi Arabia, Iran, Myanmar and Turkey), as well as economic monopolies (Google, Facebook and Twitter) both create a class of the super rich that can lead to control of information, affecting everyone. Monopolies result in curtailed freedom as well as rapid social stratification – a handful of the mega-rich against everyone else.

Democracy is difficult to achieve. It is a delicate balancing act in which everyone has human rights, most of all the right to a decent life, as well as the crucial right to speak within a public sphere that is not monopolized. Democracy must include a constant public debate (in order to flourish), and this debate must not harden and become a war of words that can lead to civil war. A debate must not be immoral and nasty.

When one crosses the line of the permissible and an unscrupulous war of words becomes real, when blood is shed, there is no beauty and goodness. Only anger and fear.

Nobody is perfect. The wise man knows when he makes a mistake. The idiot believes in his unassailable righteousness. The bad news is that the idiots are always more interested in political power. And that is why political power should never be absolute. There must be laws. We must not tolerate speech that provokes violence. Democracy’s power lies in the power of persuasion, not in coercion through power.