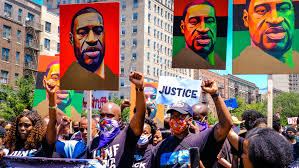 The trial of the former police officer who killed George Floyd during an arrest begins in the United States. President Biden has promised to take action against police brutality and racism. That is often difficult in practice.

The dividing line was clear in the election: On one side stood Donald Trump, the “law and order” president. He made use of the sometimes violent Black Lives Matter protests against police brutality this past summer to frighten voters, and fiercely promised to maintain order. On the other side stood Joe Biden. He talked about “systemic racism” in policing, the justified anger of Black people, reform and healing.

Now Biden is president and it’s evident that the dividing lines are not so clear when it comes to political reality. The fact that many police departments in the United States have a problem with violence and racism is obvious; it’s less clear who can solve it, and how that’s supposed to be achieved.

It begins with jurisdiction. In the United States, cities, municipalities and states have jurisdiction over police. Even institutions like universities can maintain a police force. The federal government and the president in Washington have little say in this process.

Additionally, police brutality is not a simple matter of party affiliation. On the contrary, most cities in which a disproportionate number of Black people are killed by police are governed by Democrats. Derek Chauvin, the white police officer charged with killing George Floyd, a Black man, last year and whose trial begins this Monday, was a member of the Minneapolis Police Department. The city has a Democratic mayor and a Black chief of police. Therefore, it is misleading to treat police brutality as merely a Republican problem.

As a presidential candidate, Biden promised to tackle the problem. However, so far he has deferred to his allies in Congress. Democrats in the House of Representatives approved the George Floyd Justice in Policing Act last week, a law intended to prohibit some particularly controversial police practices, at least for federal police.

This includes chokeholds, for example, like the one that cost Floyd his life, or no-knock warrants, in which police officers can serve a search warrant by breaking down doors without first identifying themselves. Additionally, the law contains provisions that limit legal immunity for police officers, or qualified immunity, which in practice has made it largely impossible to sue violent officers.

The Democratic Left Wing Is Becoming a Strategic Problem

Biden supports the George Floyd act. However, the fact that the Democrats have now passed it for a second time after a first attempt last year, shows how difficult police reform is in reality. The Republicans, who act as defenders of all upstanding police officers and a supposedly defenseless population, rejected the bill. That’s why there is a need for a majority in the Senate. Biden could intervene in the deliberation over the bill, but he would have to persuade 10 Republican senators. Whether he will personally get involved with this politically risky undertaking is unclear.

One big strategic problem for Biden is the left wing of his own party. Last summer after Floyd’s death, the Democratic left took to the streets with the battle cry calling to “defund the police.” This demand was never the official position of the Democratic Party; Biden himself clearly distanced himself from it. He has always said that most police officers are decent, and violent offenders represent a few “bad apples.” However, there were enough Democrats who sympathized with the call to defund the police and turned it into a very effective campaign weapon for Republicans.

That still applies today. Therefore, whatever Biden does to reform the police, he can’t give Republicans any basis to claim that he wants to defund the police. That would not be a particularly popular position in the wealthy liberal suburbs. However, even many Black people and Latinos who suffer the most from police brutality would prefer a different, better police force rather than fewer officers.

What Biden can do in any case, and has already done, is change the tone of the discussion. Not every deadly police operation results in murder, but the fact that there are far too many cases in which unarmed and innocent Black people become victims of brutal trigger-happy police officers because of their skin color is just as undeniable. Addressing this, comforting the families of the victims, and denouncing the social injustice that contributes to these deaths, are all part of the duties facing the president.