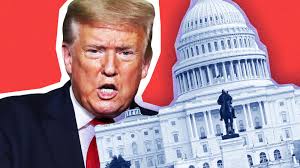 In his first speech as a former president, Donald Trump called for loyalty and a purge of House Republicans. That’s good news for President Joe Biden.

Former President Donald Trump has been quiet since he left the White House by helicopter on Jan. 20.

His Twitter megaphone was wrested from him, as was his Facebook page. After four years of Trump’s constant presence, the silence has been deafening.

Trump’s first official speech at the Conservative Political Action Conference on Feb. 28 in Florida was, therefore, eagerly awaited; as people wondered if the former president would reveal how he sees his political future.

Would he run for president again? What role did he see for himself in the Republican Party? Essentially, the questions had been answered.

Trump is Trump – election defeat or not.

Trump’s speech at CPAC in Orlando made it abundantly clear that he is still holding fast to the fantasy that he was defrauded of a sure victory in the election. All the facts prove otherwise.

He stated that he is still the leader of the Republican Party, and has no plans to found a new party.

He also strongly hinted that he plans to run for president again in 2024.

At the same time, he lit a fuse by stressing that he will throw his support behind candidates who are willing to challenge congressional Republicans who aren’t deemed sufficiently pro-Trump, Republicans such as the members of Congress who voted to impeach Trump for his role in the attack on Congress and the senators who voted to convict him.

It was Trump as we’ve seen him so often over the past four years: seeking revenge on party colleagues who in his eyes are not loyal enough.

In other words, Trump is preparing for a civil war in the Republican Party, because now it isn’t just a small handful of members of Congress who are distancing themselves from him.

It includes the powerful Senate minority leader and de-facto party head Mitch McConnell as well as a number of other prominent Republicans in Congress.

It means that come the midterm elections in two years, Republicans won’t be able to solely focus on beating their Democratic opponents. It’s more likely they’ll be in the middle of an internal showdown over who’s driving the party: Trump and the candidates he supports, or the traditionalists in McConnell’s wing.

This divide was only emphasized by the absence of key party figures at CPAC. Senator and former presidential candidate Mitt Romney had been asked not to attend after he again voted to convict Trump in January.

Both former Vice President Mike Pence and former U.N. Ambassador Nikki Haley, both seen as potential Republican presidential candidates in 2024, were also absent from the event in Orlando.

The split among the Republican Party is now on display for the world to see, and that’s good news for Democrats and President Joe Biden. An opponent who is busy fighting with itself, after all, is easier to overcome.