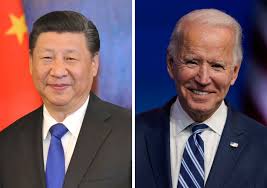 And an Iroquois reclaiming an empire in decline.

Launched during his first foreign policy speech as president, Joe Biden’s slogan, “America is back,” was left intentionally unfinished. In reality, what he was saying was: “Under Biden, America is back to war.” He allowed just 36 days to elapse following his inauguration before ordering his first act of war, the bombing of an encampment in the region of Abu Kamal (in the province of Deir al-Zour, in East Syria) housing Syrian militias with ties to Iran. According to the latest information from the Syrian Observatory for Human Rights, 22 militants have died as a result of the U.S. attack.

There is an excuse for every crime. In this case, the excuse was that a series of rockets landed near the U.S. military base located at the airport in Erbil, a semiautonomous region governed by the Kurds, resulting in the death of a non-U.S. “civil contractor” and injuries to various U.S. “contractors.” Although Washington itself did not manage to officially determine who was responsible for the initial attack, this has served as the excuse nonetheless.

The doublespeak that comes with the new U.S. wars and interventions in various Asian, African and Latin American countries rebrands mercenaries as “contractors.” To avoid the painful consequences of U.S. losses in military conflicts around the world, which generated high levels of pain and rejection among the American people after Vietnam, Washington has swapped out its official troops for mercenaries, operating under the commercial label of “contractors,” in its most dangerous military activities. In addition, this is how the true military budget is disguised, by subtracting the mercenary costs of the “contractors” from the official budget.

The immediate objective of the attack was the bombed facilities in Syria, but the real objective was Iran. Previously, at the start of 2020, during the Donald Trump administration, the U.S. Army murdered the powerful Gen. Qassem Soleimani, commander of the Quds Force, the elite arm of the Iranian Revolutionary Guard, in a drone strike.

With the aerial attacks, the United States is trying to get other Arab nations that are dissatisfied with the Iranian and Syrian governments to put pressure on European countries to support American intervention. Biden promotes a “multilateralism” that consists of involving U.S. allies, especially those in Europe, and leading them through NATO to further muddy the waters in the Middle East.

The Biden administration must confront the same dilemma as Trump faced: how to deal with the dwindling empire of the American superpower, with the rise of new centers of power that aspire to a multipolar world order and to the incessant and growing struggle of countries and people to rid themselves of American domination.

The principal issue facing the United States is how to contain the emergence of China. Biden has made it clear that he is not going to loosen the economic, commercial, technological, political, diplomatic and military straitjacket even slightly. He proclaimed that Trump’s unilateralism ultimately benefited Beijing, and proposes both “a change in the basic nature of the confrontation” and working toward a “united front of allies and partners of the U.S. to confront China’s abusive behaviors and human rights violations,” increasing the participation of its European allies in NATO, Japan and Australia. Under this scenario, it would no longer be the United States versus China, but rather China pitted against the ensemble of Western powers.

The fact is, the world has changed during the last four years. The rate of U.S. decline has sharpened, while the emergence of China and the Asia-Pacific and the progression of Europe toward irrelevance have also sped up at the same rate. These are trends that the pandemic is further accelerating.

It is undeniable that Trump’s policies were aggressive, sometimes even reckless, and that he placed world peace in serious danger. Yet the fact remains that Trump is the only president of the past few decades who completed his term without having directly engaged the United States in a large-scale military conflict.

On the contrary, Barack Obama, Trump’s predecessor and who Biden served as vice president, is the only American president who holds the record of completing two consecutive terms, eight years in total, with the country at war for every single day of this period, including the day he received the Nobel Peace Prize.

Arm in arm, Obama and Biden bombed Afghanistan, Libya, Somalia, Pakistan, Yemen, Iraq and Syria; they supported “soft” and irrevocably brutal coups d’état in Honduras and Paraguay; they destabilized Venezuela, Brazil, Ecuador and Bolivia; and finally, they designed and encouraged the “springs” and “color revolutions” in Maghreb and Ukraine.

We must be aware that the more the fight of the people reduces the extent of U.S. world domination, the more its aggression and its opportunism will increase, and it will attempt to pillage the countries within its orbit and launch counteroffensives with even greater zeal to try to recover lost ground. For as long as it exists, the American superpower represents a tremendous threat to world peace and all the nations of the world; it is a threat that should not be underestimated for a mere second, even if it hides behind a friendly veneer.