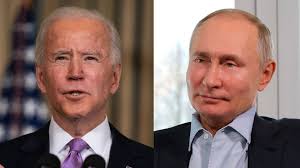 Joe Biden said of his Russian counterpart, Vladimir Putin, that he was “a killer” and promised that he would pay “a price for his acts, particularly election interference.

Joe Biden said that he thought his Russian counterpart, Vladimir Putin, was “a killer” and has vowed that Putin will pay “a price” for his actions, particularly for the additional election interference that Washington accuses him of.

“Do you think he’s a killer?” The question posed by noted ABC commentator George Stephanopoulos was direct, and the president’s reply left no room for doubt. “I do,” Biden replied in an interview broadcast on March 17.

Biden didn’t indicate if what he had in mind was the poisoning of Russian opposition figure Alexey Navalny in August, which the United States has blamed on Russia. The dissident Navalny was imprisoned upon his return to Russia after five months of convalescence in Germany, and Washington has called for his release.

‘Biden Has Insulted the Citizens of Our Nation’

“With his comments, Biden has insulted the citizens of our nation,” said the president’s close associate on his Telegram account, the first reaction by a high-ranking Russian official.

Since he took office in January, President Biden has been firm with the head of the Kremlin, in contrast to the good will that his predecessor, Donald Trump, showed Putin, something that even Trump’s own Republican Party criticized him for.

The contrast with the former president is striking. In response to a Fox News reporter who claimed that Putin was a ‘killer” in February 2017, Trump startlingly dodged the issue, inviting America to examine its conscience.

On Wednesday, in response to Russia’s use of “chemical weapons,” the Commerce Department announced that it was extending export restrictions on sensitive products to Russia, without providing further details.

These measures are not improving “the odds of a normalization of relations,” said Sergei Ryabkov, Russian vice-minister of foreign affairs.

“The United States will be fully responsible for any further deterioration in Russian-American relations. There can be no doubt about that,” Ryabkov said, quoted by the state press agency RIA Novosti.

American intelligence is also in the process of conducting a review of various other acts that the U.S. has openly accused Russia of committing, including a recent massive cyberattack and paying bounties to the Taliban to kill American soldiers.

In a completely new report, American authorities have also accused “actors tied to the Russian government” of new instances of election interference in 2020, following interference in 2016. Putin “will pay the consequences of that,” Biden warned in regard to such interference. Pursued a bit later by reporters about the nature of the American response to Russian actions, Biden added: “You’ll see shortly.”

Recalling his first conversation with his counterpart, Biden reported telling Putin, “I know you and you know me. If I establish this occurred, then be prepared for the consequences,” without specifying precisely what he was alluding to.

Biden has nonetheless reaffirmed that he wants to “work” with the Russians “when it is in our mutual interest,” following the example set by the extension of the New Start nuclear disarmament agreement made shortly after he took office.

Peskov asserted that the report is a “pretext for once again raising the question of new sanctions” against Russia.

About Peter Lopatin 65 Articles
After retiring from a 25+ year career in corporate and business law some years ago, I became an ESL teacher, which I continue to do part-time. I am also a published writer of short stories, poetry, essays and book reviews. My love of the French language has been a constant and I have worked to refine my command of French over the years.