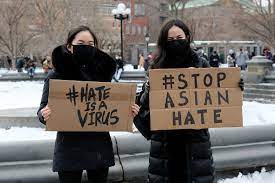 The mass shooting in Atlanta, Georgia, has caused great concern among Asian Americans and Asian countries abroad. Unlike most shootings in the past, many of the victims were Asian. Local police are unaware of whether the murderer’s actions were racially motivated; however, the New York Police Department stated that they will “increase police presence in Asian neighborhoods.”

Putting aside the fact that the U.S.’ gun control policies are broad and make it difficult to eradicate potential gun-related crimes, the shooting raises many questions: whether or not this incident alone indicates the resurfacing of a hidden history of discrimination within the U.S., whether it amplifies the hatred of minorities such as Asians during the pandemic, whether it motivates crimes fueled by hate and prejudice, whether it will cause a greater racial divide in American society, as well as whether or not Asian Americans from China, Japan and South Korea should join together in resisting this danger.

The U.S.’ history of racial discrimination is an ugly reality and one that is deeply rooted in American society. As we all know, the U.S. is a federation of immigrants, people of different colors and ethnicities; under the appearance of freedom, openness and tolerance, ethnic aversion, racial discrimination and even xenophobia have always been present. Typical examples include the persecution of Native Americans by European immigrants, discrimination against Blacks by European and American whites, and European Americans’ contempt for disadvantaged ethnic groups such as Asians. The infamous Chinese Exclusion Act (1882-1902), the forceful relocation of Japanese Americans to internment camps, the Los Angeles riots (1992) that led to the vandalization of Korean American businesses, etc., are all examples of blatant violence and discrimination against Asian Americans. These experiences, all of varying degrees, have converged and caused discrimination to become embedded in the fabric of American society. It has grown stronger, and hate crimes have increased.

The current pandemic has shone a light on Asian American hate in the U.S. The global outbreak of COVID-19, conversations about its origin, of cooperating to contain the outbreak, etc., the then president’s blame-shifting and politicization of COVID-19, his incitement of hate speech and the clamor from the far right have not only aroused a sense of xenophobia toward people of Asian descent; they have also helped ignite resentment and animosity among the white community, which in turn has led to crimes committed against Asians both openly and secretly. According to a survey conducted by the Center for the Study of Hate and Extremism at California State University, San Bernardino, in 2020, there were 122 reported incidents of hate crimes against Asians in 16 major cities across the U.S. This was 2.5 times the number in 2019; however, in New York the number was nine times higher. Statistics from the human rights group STOP AAPI HATE also showed that there were 2,808 reported cases of discrimination, such as hate speech and hostility, from March 19, 2020, to the end of the year. Among the victims, 40.7% were Chinese, 15.1% were Korean and 8.2% were Vietnamese. Keiko Tsuyama, a Japanese journalist living in New York, stated in an analysis that since the announcement of Donald Trump’s candidacy for the presidential election in 2015, hate crimes against Asians have been on the rise, and have been a testament to his destructive ability to incite populism and ethnic rivalries.

Prejudice against Asians has evolved from hate into vicious crimes that have caused great concern. In the context of a society torn apart by rivalry between the Democratic and Republican parties, discrimination and hatred against Asians has escalated from verbal to vicious attacks, from assault, targeting primarily women, to the targeting and injuring of elders. On Jan. 28 of this year, a Thai man in San Francisco was deliberately knocked down and was killed while walking. On Feb. 25, a Japanese woman was seriously injured in an attack in Seattle. On top of this, many of the victims of the mass shooting in Georgia were Asian women. Crimes against Asian lives and property have continued to increase and become more and more problematic.

What should be done about the spread of discrimination and escalation of violence? Looking at the issue from President Joe Biden’s perspective, it is necessary not only to bridge the gap between Democratic and Republican voters, but also to work toward dispelling antagonism, especially a sense of hatred, between Americans of the majority and vulnerable minority groups such as Asian and African Americans. In his speech on March 3, Biden appealed to Americans, stating that vicious hate crimes against Asian Americans that force them to live in fear were “wrong, … un-American, and … must stop.” This speech and the subsequent executive order aimed at eradicating violence gave Asians a glimmer of hope. At the same time, from the perspective of the Asian ethnic group, Asian Americans from China, Japan, South Korea or any other country that has been hurt by more incidents of hate crimes should unite to resist prejudice, hateful thinking, hostile environments and even hate crimes in American society.

First, they must work together to create a social climate that condemns such behavior through public opinion, and then investigate the consequences of Trump’s viral, racist remarks regarding the virus and people of Asian descent. Second, they must call for the establishment of legislation that prevents discrimination against and harm of minority groups such as Asians, and strengthen the legal protection of all Asian Americans, without discriminating among Chinese, Japanese, Koreans or Filipinos. Third, they should learn from New York’s Chinatown residents and establish watch groups, form partnerships across all lines of the Asian American community and establish community-based response teams. Finally, Asian nations, along with their embassies and consulates, must demand that the U.S. government guarantee the rights and privileges of their nationals who reside in the U.S.